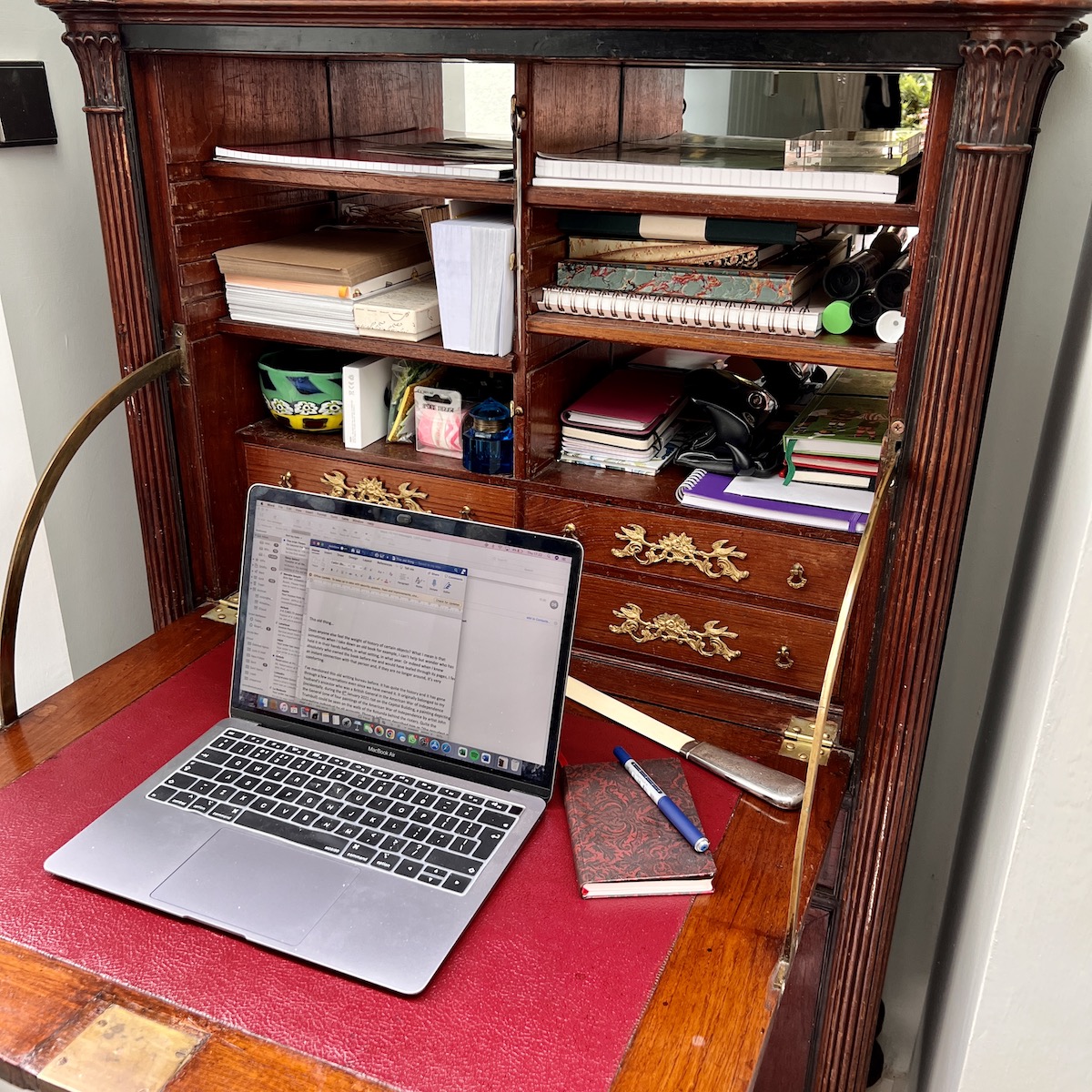 Does anyone else feel the weight of history of certain objects? What I mean is that sometimes when I take down an old book for example, I can’t help but wonder who has held it in their hands before, in what setting, in what year. Or indeed when I know absolutely who owned the book before me and who would have leafed through its pages, I feel an instant connection with that person and, if they are no longer around, it’s very comforting.

I’ve mentioned this old writing bureau before. It has quite the history and it has gone through a few incarnations even since we have owned it. It originally belonged to my husband’s ancestor, Major General William Phillips (1731-1781), who was a British General in the American War of Independence. Incidentally, during the 6th January 2021 riot on the Capitol Building in Washington DC, a painting depicting the General (one of four paintings of the American War of Independence by artist John Trumbull) could be seen on the walls of the Rotunda behind the rioters. The General was a most interesting individual by all accounts.

He was from a family of career soldiers, originally from Wales. Thomas Jefferson described him as “the proudest man of the proudest nation on earth” and a German Captain Johann Ewald described him thus, “One saw in him and his precautions that he was worthy of commanding men, and one recognized in him the skilful and industrious officer. The general drove everyone zealously to his duty. But he was the most pleasant, unselfish, and courteous man in the world." The last sentence could just as easily have been written about his great great great great grandson, my husband, and indeed about my husband's father. The first bit not so much, although had either of them ever thought to pursue a military career (that was never going to happen), who knows!

It was normal back in those days to travel with your bureau (I imagine it containing the maps and strategies of war) and there are even two brass rings on the back that I assume a pole would have been passed through to move it about or indeed to tie it to a cart. Within the body of the bureau, there are four shelves that can be moved up and down, four drawers, two with compartments for smaller items, a pull-down front with leather inset that serves as the writing table, and below that a long drawer.

Finally, it has two doors beneath the drawer that open to reveal shelved storage. It’s a very practical piece of furniture that would have held lots of items, from stationery to files and documents. Anyway, it enjoys rather less lofty company these days and has had a few knocks and scratches since the old General passed away in Virginia in 1781. But for a piece of furniture that is at least 275 years old and is so well travelled, it’s in remarkably good condition, all its brass fittings and insignias intact.

I believe that it was passed down to the General’s son, William Edward Phillips (1769-1850), who was Governor of Penang in the 1820s, and through four further generations to my husband. We also have a few items that belonged to the Governor - his vanity case with brass inlaid initials and a very ancient notelet written by him referring to an invitation from the Duke of Wellington to dine with him at his quarters. This was quite the find, tucked under some bottles in the vanity case. Such a wealth of history in one family.

From Virginia to Malaysia, England to Ireland, this bureau has certainly got around. When we were given it by my husband’s grandmother many years ago, it contained a few little nods to its past lives - a mother of pearl type of Mahjong tile that ties in with the Penang era, a curious sort of ruler and two pieces of a broken portrait of an army officer. The portrait could be of the General as a younger man or of his son the Governor of Penang. I have compared it with other depictions of both men and feel it is more likely to be the Governor as a young man. It's a little puzzle that I hope to solve at some point.

We used the bureau as a drinks cabinet for a while before getting a new (old) unit that serves that purpose better, so now I’ve decided to return it to its original use, as a writing desk. I feel it will offer better inspiration for my musings than the modern white console that I have been using for the past while. Now if it could only speak, what tales it could tell and what tales I could write…