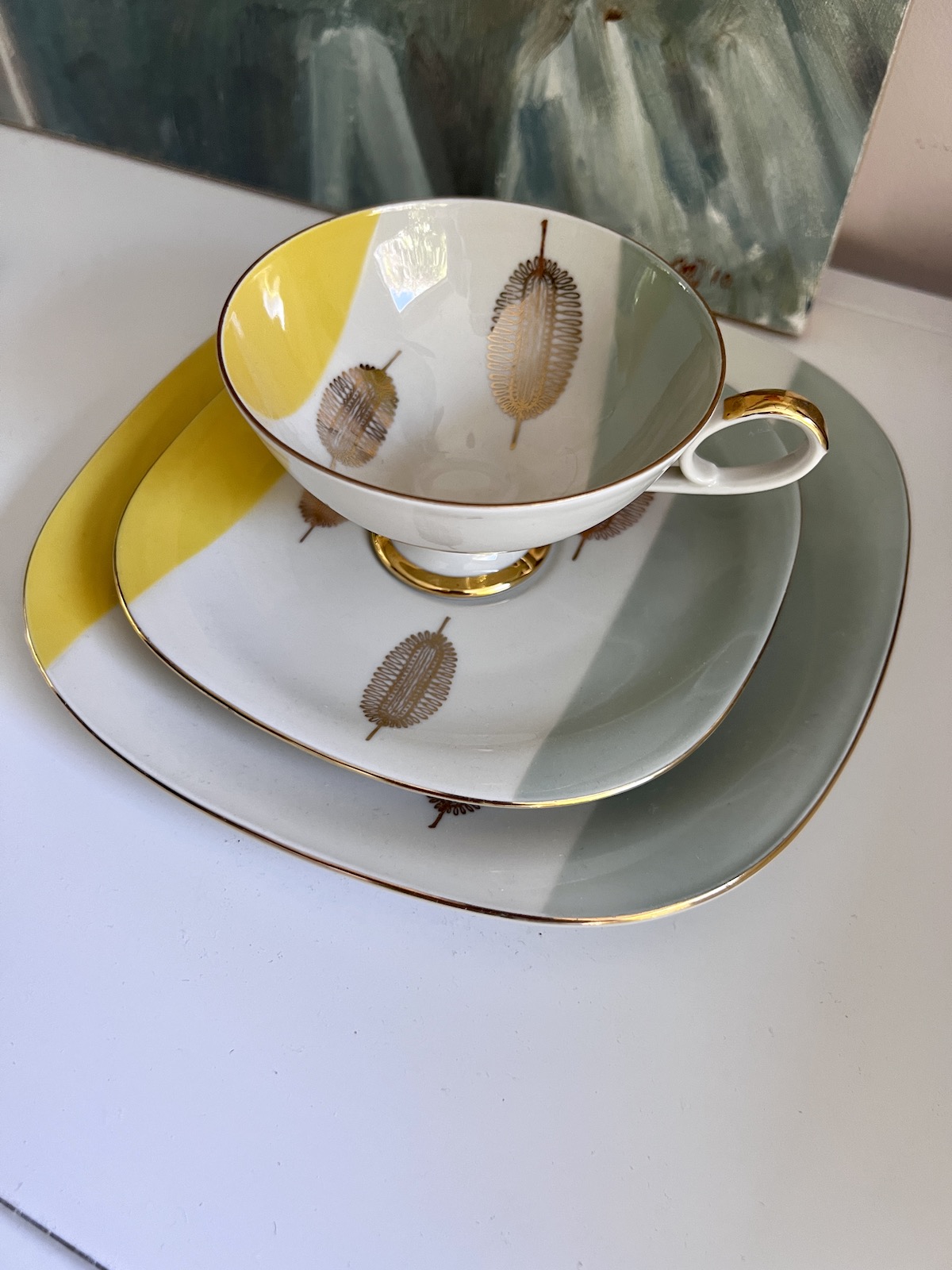 A package was delivered to me one morning a few weeks ago. I wasn’t expecting anything. It was from a friend and arrived a few days after my birthday. Now I have all but stopped exchanging birthday gifts with friends except on significant birthdays or if I happen to come across something that I know a person is looking for or has admired. It’s all become a bit haphazard. Anyway, I wasn’t expecting a gift so when this package arrived, I was genuinely surprised. And upon opening it, the contents were even more unexpected. They were a cup, a saucer and a plate.

My friend has a huge collection of ceramics and I had admired this particular set when she posted it alongside some others on Instagram months previously. It’s a beauty. I was very touched that she had even remembered let alone parted with it, but she assured me that she was just happy to share a little of her collection with someone who appreciated it. It’s perfect, whether to just sit looking pretty on a shelf or for those rare moments when I’m on my own and feel like treating myself to a slice of cake and a cuppa. I’m normally a teabag-in-a-mug sort of girl but I don’t dispute for one minute the widely held view that tea, or coffee for that matter, tastes better in a beautiful porcelain cup.

When I was small my mum decided that she’d like to start a collection. Some people collect old scent bottles and she briefly toyed with that idea. I remember viewing a house a few years ago and the owner, a lady, had an extraordinary collection of small colourful scent or perfume bottles in a mirror-backed alcove in her living room. It was so beautiful. At the viewing of the house, on a sunny day, the light coming through her window caught the brilliant little bottles, and the combination of colours and mirror had the effect of a kaleidoscope, giving the illusion of a far greater number of little bottles than was the reality. Incidentally, my husband gave me a gorgeous brass kaleidoscope, something I had long been coveting, for my birthday. I could become such a kaleidoscope bore. It’s endlessly fascinating to me to peer through it at all sorts of things. It’s not one that has little bits in it. It’s what is called an ambient kaleidoscope, so it distorts anything you point it at. Quite literally endless possibilities.

Anyway, my mother eventually decided to collect antique porcelain cups and saucers. How boring, I hear you say. Actually, not so. Over the years she acquired some beauties. In fact, they had to be special to make it into her collection. They came in all shapes, sizes and colours. Some had tiny handles that you wondered what delicate little hand had lifted, others were more robust. One had a band of smooth gold around the lip, another's lip was scalloped, a third had delicately painted figures in kimonos displayed around its fat middle. And underneath were the various manufactures marks, the crown of Sitzendorf sitting atop a sort of dollar sign, the unmistakable insignia of Wedgwood, the crossed swords of Meissen.

She had a special glass shelving unit built into the wall in our lounge to display the collection and I loved gazing at them and trying to decide which I liked best. One of my favourites was a small yellow, black and white demi-tasse (what we would now call an espresso cup) perched on an appropriately sized saucer. I guess it was from the 1930s, judging by the style, and I have no idea who the maker was. My father, not to be outdone or out-collected, decided he’d start a specific collection too and he opted for old jugs or pitchers. I suppose it would have made sense, Mum's cups and saucers and Dad's jugs, except that they were never used for their original purposes. It's remarkable how many of these you can find in flea markets and antique shops. The difficult part was choosing the ones to add to their collections because there was certainly no shortage. But choose they did, some really lovely specimens.

However, being the no nonsense German that my mother is, when my parents moved house, she sold most of the collection. In her practical mind, it was of a time and that time had passed. Her cup and saucer collecting days were over. I wish I had paid more attention when they were moving and had stopped her parting with some of those cups and saucers. Funnily enough, my rather more sentimental Dad’s entire jug collection survived that and a subsequent move and still sits on a high shelf in my mother’s dining room. And I still have fun trying to decide which I like the best.

So, when the pretty porcelain set arrived for me a few weeks ago, I think I could be forgiven for feeling that it was a sign that I should start my own little collection. Mind you, I think my own ‘selectively’ more practical husband (than me) might have a different opinion on the subject. Watch this space.