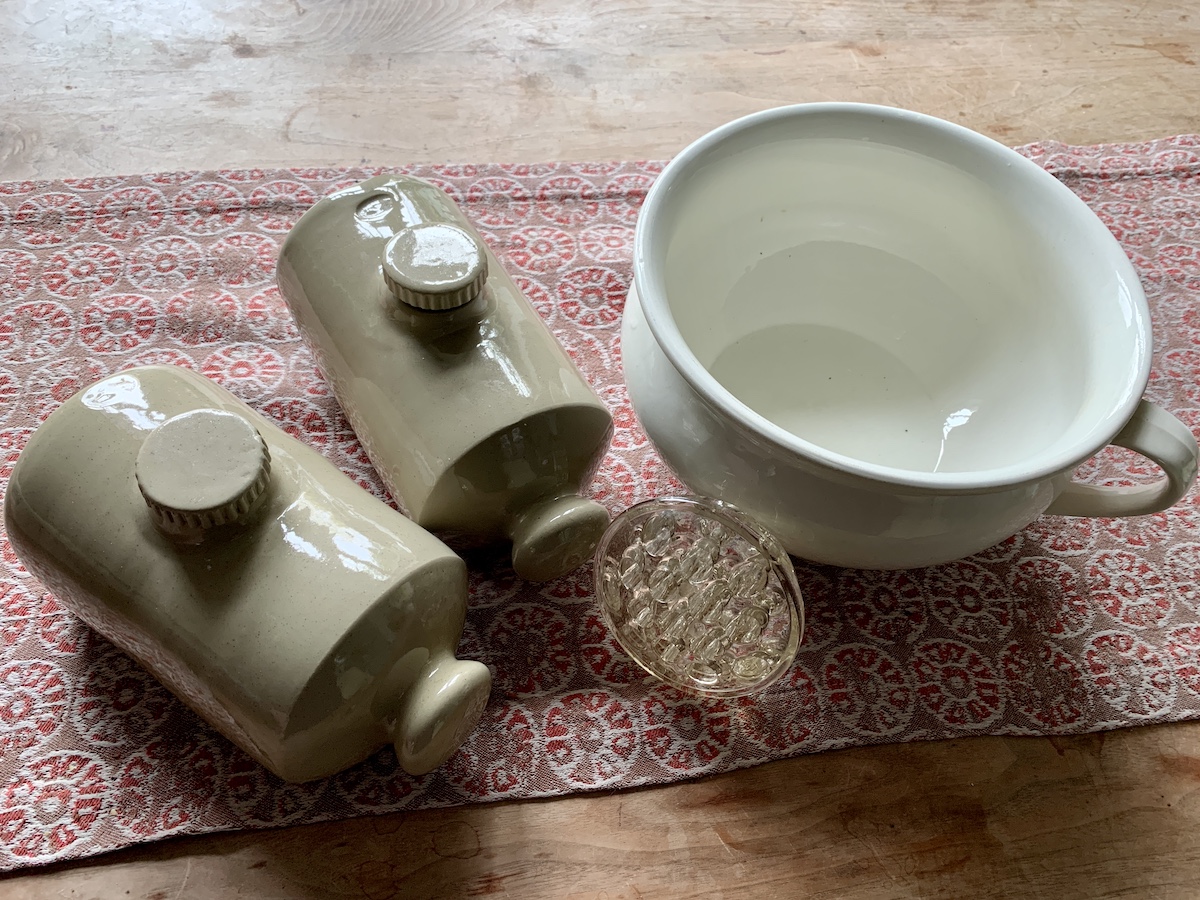 The certainty of chance

I don't know whether it's just lockdown messing with my head or whether there's something more spooky at play but there have been just a few too many coincidences in my life recently. The latest of these made me start to wonder if I have supernatural powers.

Two days ago my mother-in-law called around with a gift for my eldest daughter's birthday. I had done some little Easter flower pots and she was admiring them so I told her about the sellotape trick - creating a grid of sellotape across the top of your vase or jar or pot and arranging flowers in the holes of the grid. The grid holds the flowers in place and really makes such a difference to how the flowers sit in the utensil. Anyway, my mother-in-law proceeded to tell me that she has a little vase that has a glass piece at the top with holes to stick flowers in and that you used to be able to get little glass inserts that you could put in vases or containers to perform a similar function. A friend of mine was kind enough to give me a gift of a florist's frog recently, which is a little metal base with spikes sticking up that you can stick flowers into, and it's great. But of course I was now intrigued that these glass frogs were a thing long before the metal spiky frog. I thought to myself 'I must keep an eye out for a glass one'.

An hour after the conversation with my mother-in-law, I was sitting in my car waiting for my daughter to come out of the supermarket when my phone pinged with a message. It was a friend of mine who told me that she was clearing out her mother-in-law's old house and had come across a little glass item and, knowing that I love all things glass, wondered if I might like it. She sent through a photo and I actually did a double take when I saw what it was. Yes, you've guessed it - a glass frog exactly as my own mother-in-law had described. Now seriously, what are the chances? I mean it's not like we are talking about a bar of chocolate or a pair of shoes or a plant that anyone might have in their home or garden. We are talking about an item that I never knew existed until an hour previously and one that is hardly commonplace. If that's not pretty spooky, I don't know what is.

Anyway, masked up and maintaining social distance, I had a tour of the old house. I could happily while away my life visiting old houses. I get such a buzz out of seeing what interesting things lie beneath floorboards and behind pieces of furniture. I particularly love when you peel away wallpaper and find some gem under it. My friend told me to look into a cupboard under the bathroom sink and there, hidden on the wall at the back, was the most wonderful old wallpaper. I had to photograph it for posterity. These are the sorts of things that excite me! I had a similar experience when my mother-in-law renovated her bathroom a few years ago and discovered the most gorgeous old wallpaper under several other layers in her bathroom. I took a photo of that too. I must dig it out.

But I digress. The glass frog is back home with me now, along with two ceramic bedwarmers and a chamber pot that my lovely friend also gave me. I have plans for these. I don't know what yet but I've got my thinking cap on. Anyway, this latest coincidence was just too strange. There have been others though, not as bizarre as this one but certainly sufficiently strange to give one pause for thought.

I have been talking about a particular Easter egg for weeks, an artisan one that I had many years ago. I had seen several by that particular chocolatier in local shops but not the flavours that I wanted - champagne and strawberry! I was actually going to buy one for myself if I found it. Lo and behold, over the weekend my daughter's boyfriend dropped in an egg for her and what was it but the exact egg I had been looking for. Had it been a common egg or even one that is unusual but available, I'd have thought nothing of the coincidence but I haven't seen this flavour of egg anywhere I've looked.

Then there are the ongoing coincidences that I and an old schoolfriend share. We haven't seen each other for probably 30 years. The last time I met her was on a train when we were both in university. When I was pregnant with my last daughter, I decided to join an online pregnancy group so I made lots of online friends and of course, as is the nature of these kinds of groups, we all had handles that weren't our real names to protect everyone's identity. I was in the group for a long time after my daughter was born and even met up with some of the other mums. But it was quite a while later that I discovered that one of the mums in the group was in fact my old schoolfriend. Not only that but she and I had called our daughters (born within a month of each other) the same name. Not such a coincidence until we discovered many, many more parallels. At this stage, it has almost become a joke. I posted a photo on Instagram of a scenic spot when we were on holiday in southern Ireland last year and within minutes my friend contacted me to say she was holidaying just up the road. I have a large wooden figure of Pinocchio in my living room that I got in a little craft shop in Italy years ago. She has the exact same one that her mother-in-law brought her from holiday in Italy. I have a painting of a lighthouse hanging in my bedroom and, when she spotted it recently in a photo, I promptly got a message from her with a picture of the exact same lighthouse in a painting in her house. We laugh about it. I can nearly anticipate her messages these days...

Then there was my craving for stuffed vine leaves one night last week. I had a jar of them in my cupboard so I opened that and devoured them. I have a good friend who lives in Turkey and is a superb cook and a recent food blogger (check out https://aegeanella.wordpress.com/) and I thought to myself that I must ask her for a recipe to make authentic stuffed vine leaves or Dolmas, as they are known in Turkey. The following morning I opened Instagram and she had literally just posted a recipe for the Dolmas that she had made the night before!

There are many more incidences...my daughters and I constantly start humming the same random songs and stuff like that. But I do think you become attuned to people that you live with so I discount those coincidences. But the others, those that involve unusual coincidences or people who I don't live with or see regularly, well, I must admit that they tend to give me a little shiver down my spine.

And then there are the unexplained things that happen and that give you a bit of a jolt...

My parents downsized seven years ago and got rid of an awful lot of stuff at the time, selling it or giving it away. When they moved into their new house and unpacked, my Dad noticed that a specific vase that he had bought in an antique shop and particularly liked, had vanished. He was certain that he hadn't given it to anyone or sold it because it was a favourite of his. Secretly I'm pretty certain that he thought my mother parted with it (she's rather less nostalgic and sentimental where stuff is concerned) but she denied doing so and, after hunting everywhere in their new house (I even checked cupboards) with no success, the mystery remained unsolved. Dad brought up the subject of the missing vase quite frequently so it really did bother him. Anyway, a few days after he died over a year ago, my mother rang me sounding rather strange and said "you won't believe this but I found the vase". Not only that but it wasn't hidden somewhere obscure or in a box that had been forgotten about. It was in a cupboard in her kitchen, behind a wine bottle, a cupboard that I know for a fact that I checked.

And of course then there's that robin in my garden who looks intently at me like he knows me very well...what a mysterious world we live in!