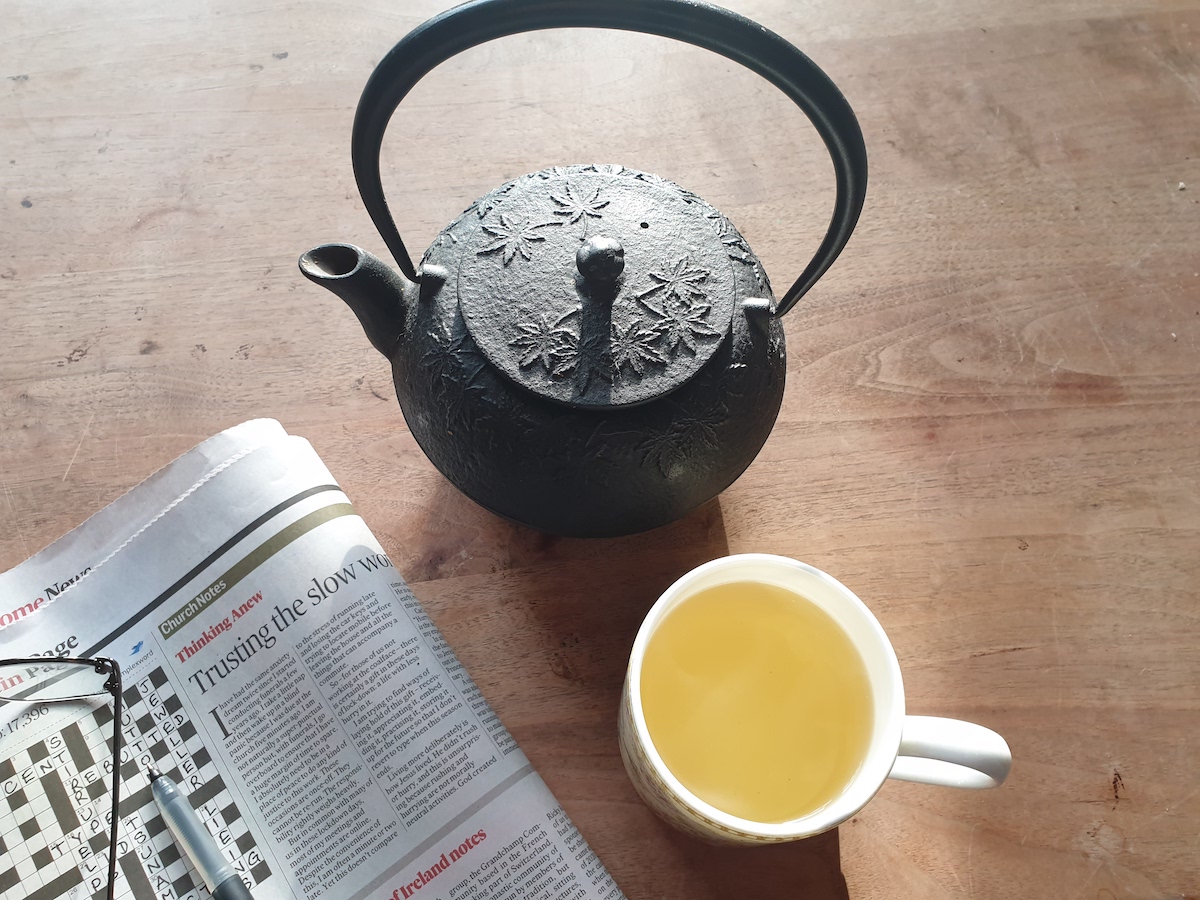 I was never a big tea-drinker despite the fact that tea featured at breakfast and tea in our house. Tea (just to clarify for any non-Irish out there), as well as being a beverage, was a meal that was traditionally eaten at around 6pm, as distinct from the main meal of the day called lunch. Now things have changed, and most Irish people have a light lunch and a main meal or dinner in the evening. Tea as a meal has all but disappeared in the mists of time.

Anyway, my Dad always ‘made’ the tea (the tea beverage as opposed to the meal) in our house. On rare occasions, my mother would tire of waiting for him to come in from the garden (where he would be unwinding from a day’s work, kicking football with my brothers), or from helping with homework or reading the newspaper, and she would deign to make the tea. When Dad eventually came into the kitchen and went to the spot where we kept the kettle and teapot, he'd see that the latter was missing. A quick spin around to check the kitchen table and his worst fears would be confirmed - my mother had made the tea! If she wasn’t present at this point, he would attempt to remedy what he already knew to be a disaster, amidst much sighing, lifting the lid of the teapot and peering in, a pained expression on his face. A proper pot of tea was sacrosanct where Dad was concerned and my mother simply couldn’t make one.

No one blamed her. She hadn’t grown up in a nation where a strong pot of tea was the lifeblood, where households were divided depending on whether you drank Lyons tea (green label or red label) or Barrys tea (we were always a Lyons green label household) and where the proper rituals had to be observed. She was intolerant of what she perceived to be nonsense – heating the teapot, measuring out three teaspoons of loose leaves and filling the pot with just the right amount of water, freshly boiled. Mum poured hot water (fairly recently boiled was good enough for her) on a few scoops of tea leaves and hoped for the best.

Usually, however, she was sensible enough (or not mischievous enough) and left the ritual to my Dad. But to show her scorn with the entire carry-on, she would only half fill her cup and top it up with boiling water. Actually, that’s not really fair. She just liked weak tea. And, of course, this set her apart from every other member of the family (me excepted) and most of Ireland for that matter. But that’s the thing about Germans, they are very uncompromising. My mother is the best in the world and has a heart of gold but when she decides she’s not for turning, well, she really isn’t. So, the tea-making station became a small battleground in our house. She treated the seriousness of the ritual with disdain and, I honestly believe, sometimes decided to make the tea knowing the reaction it would have, just for a bit of fun.

But it wasn’t simply about the way the tea was made. There was also the matter of the teapot and the teacup. Up until the day he died, my Dad wouldn’t take tea out of a mug. It had to be a cup and saucer. I actually bought some cups and saucers just for the occasions when he came to our house. He maintained that tea from a mug simply didn’t taste the same. I sort of understand his rationale. There is something quite lovely about drinking either tea or coffee from a fine cup. I wouldn’t go so far as to say it tastes better, but it does give an air of solemnity and respect to the occasion. As for the teapot, well, it couldn't be too heavy or too light. Dad was very happy with a cheap, stainless steel one that poured beautifully. My efforts to impress with cast-iron or ceramic teapots were greeted with raised eyes and eyebrows! I said that Germans are uncompromising, but I think I’ve just proved that the Irish give them a pretty good run for their money.

I confess, though, to leaning towards my mother’s side of the fence. She was, and still is, a superb cook who loved experimenting with new dishes. My father, for all his vision in business and his global outlook, was a traditionalist where food was concerned. He had a very plain, Irish palate, something that was hardly surprising given that he was brought up during World War 2. Even before rationing, the Irish diet was certainly not the most adventurous; an orange was considered an exotic fruit. It consisted largely of staples – bread, potatoes, meat and whatever fruit and vegetables could be grown locally –cabbages, carrots, peas, turnips etc. To illustrate the point, when my mother first came to Ireland, she was appalled when my grandmother produced turnip for Sunday lunch. “But in Germany we feed turnips to pigs”!!! Mum couldn’t stand the smell of them and rarely cooked them. So, there was a world of difference between the palate of my mother and that of my father.

Anyway, given my mother’s far greater experience of different cuisines, it stood to reason that I would look to her for guidance when it came to anything food or drink related. She drank her tea black and weak and therefore so did I. My father drank his strong, with three teaspoons of sugar and just enough milk to give it a light caramel tone. If you had handed him a glass of the finest vintage claret, he would not have swapped it for his cup of tea. But, of course, in the same way that my tea tastes were shaped by my mother so too my Dad’s tastes were shaped by his mother, my very formidable grandmother. She couldn’t function at all without a cup of tea at regular intervals throughout the day. Dad wasn’t quite in that league. On holidays with my grandmother, our travel plans literally revolved around where to get the next cup of tea. That is not an exaggeration. But it wasn’t unique to her. It was a generational thing. For men of that time in Ireland the preferred beverage was a pint of stout (unless they were teetotallers, of which there were a significant number). For women it was generally tea.

In any event, I grew up appreciating the tea ritual but yet drinking it like a European. And then I discovered coffee in my early teens. Tea just didn’t have the same panache. It felt old fashioned. My mother had always been, first and foremost, a coffee drinker and Dad even partook on the odd occasion. Coffee went particularly well with her German baking. But, although I loved the smell of freshly brewed coffee, I didn’t drink it until I started hanging out in coffee shops in my teens and it was de rigueur. When I moved to university, no one drank tea apart from, ironically, a few foreign students. You couldn’t party all night and attend lectures all day on tea! No, strong coffee it had to be, and lots of it. And my coffee addiction continued into the workplace. I used to stop at Bewley’s on Westmoreland St in Dublin on my way to my office and buy a bag of freshly-ground coffee and make filtered coffee for myself and my colleagues. We went through ridiculous amounts during the course of a day. It was a very rare occasion when I didn't have a mug of coffee on my desk.

But then I noticed I was getting awful slumps in the late afternoon, when all I wanted to do was put my head down on the desk and go to sleep. So, one day I decided to switch to green tea and I didn’t drink another cup of coffee until several years later. That’s me…all or nothing. However, on a Christmas holiday in Germany, the aroma of fresh coffee at breakfast one morning drew me back in. Four cups at breakfast followed by two espressos at lunch and another few cups with afternoon cake and by evening I felt like I was on the verge of a heart attack and my brain was a jittery mess. I actually had to leave the dinner table and go to the bathroom and throw cold water on my face. It made no difference. It literally took until the following morning for me to come down from the caffeine overload. Anyway, after that experience, I haven't touched a cup of coffee until relatively recently. And, in fact, I also switched from green tea to chamomile or mint. Now I’ll have the very odd coffee if I’m offered one and everyone else is drinking it, but I’d never order or make one myself.

Yes, chamomile tea is my go-to beverage and the hotter the better. I find it pleasant and soothing. And the old tea rituals of my youth remain, despite the fact that my Dad had no time whatsoever for herbal teas, which he considered to be a denigration of the word tea. Proper tea to him was black not straw-coloured. Still, the same principles apply to both - the water has to be just off the boil and the leaves or bag have to soak for just the right amount of time. I can’t tell you how long. I just know by looking at it. I can’t bear the bitterness of tea where the teabag or leaves have been left brewing for too long. And that’s usually why I prefer a teabag because you can remove it when it has done its job.

I haven’t quite reached the stage where I’ll need to divert the car from its course to seek out a cup of tea, but I do tip my hat to my grandmother and my father for their lack of compromise when it came to what they enjoyed. Coffee appreciation is a veritable national sport in Ireland these days, but I won’t be tempted away from my cup of tea again.

Variety is the spice of life