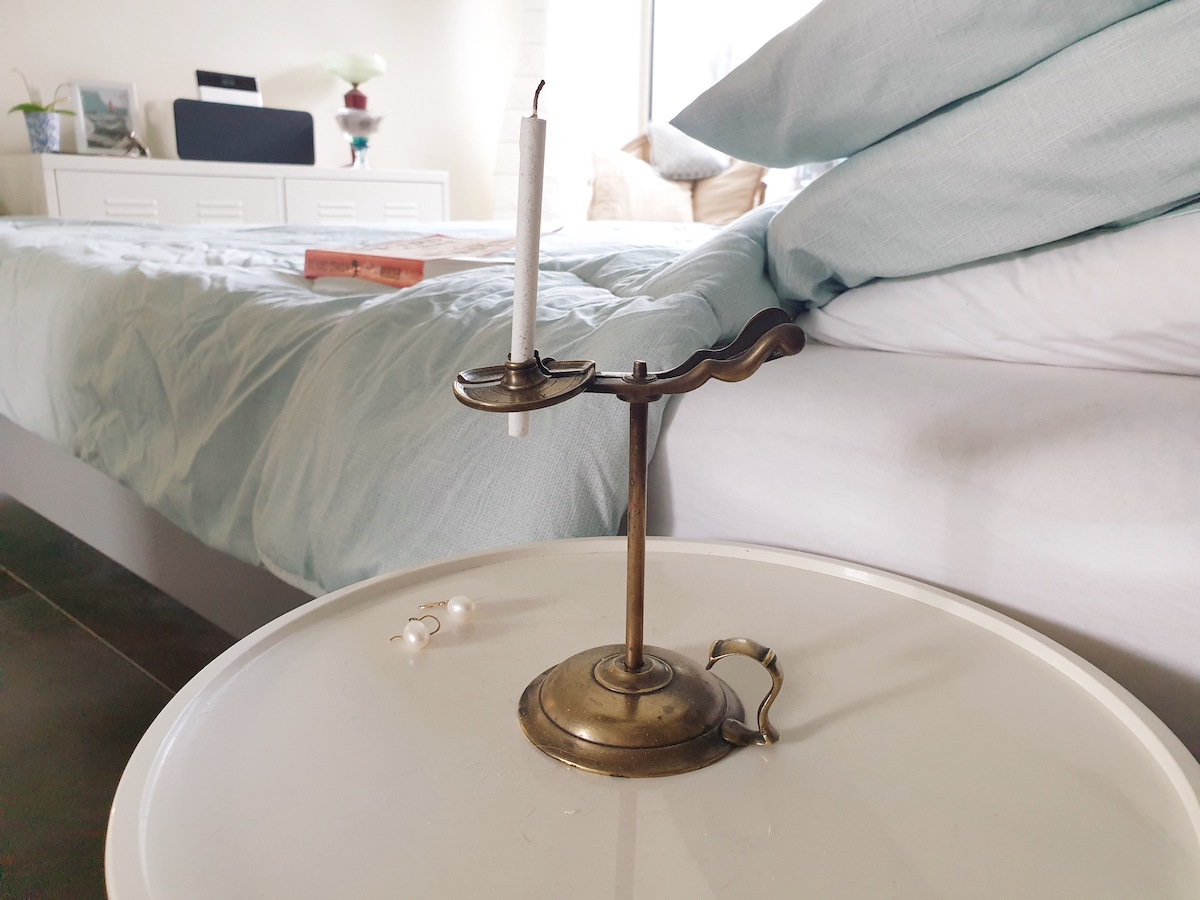 On my bedside locker, I have what I originally thought was an ancient candle-holder but that it turns out, after some research, is what is known as a wax jack. Wax jacks originated in the late 1600s and were used to melt wax to seal letters, before the advent of envelopes. A long taper of beeswax with a cotton wick inside was wound around the pole of the wax jack and the end fed through a small hole in the plate. The plate on this particular one opens much like a scissors to make it easy to position the wax taper. I have no idea how old this particular wax jack is but, being someone who is fascinated with unusual, historical objects, when my mother asked me recently if I'd like to have it and explained its provenance, I was delighted to accept it and decided to find out a little more about the old lady, Kathleen, who gave it to my father several years ago.

About a kilometre from my childhood home, at the end of a narrow, overgrown laneway, Kathleen lived in a whitewashed cottage, its thatched roof long gone and replaced instead by a corrugated iron roof, that by the time I was a small child had suffered from many years of Irish weather and being repaired over and over. The scene was reminiscent of the depictions of the Great Famine of 1845-49, where wretched, gaunt-faced families stood outside their humble cottages, valiantly attempting to stand their ground against the force of the bailiffs who had come to evict them. Kathleen had lived in this cottage her entire long life. I never knew her story but because I'm currently doing a family history course, I was prompted to do some investigating.

She was born in 1900 in the heart of a rural community, a time when the nearest provincial town, some five kilometres away, would have seemed as distant as a foreign country. Her father, a farmer, was born in 1855, in the aftermath of the famine, a time of poverty and hardship in rural Ireland. Her mother was born in 1862 and they were married in their local church in 1885. Kathleen was the youngest of their six children. In 1915 when Kathleen was 15, her father died. At that time, her three older sisters were 28, 24 and 23. Her two brothers were 20 and 17. The eldest boy was a coach builder and married a neighbour's daughter in 1924. It appears that Kathleen and her two eldest sisters never married and remained in the family home with their widowed mother. I remember being in her home on several occasions with my Dad. He'd regularly call to get a slab of homemade butter from her or visit her at Christmas with a gift. The cottage was spartan with just two small windows, a bare stone floor and a fire over which she would hang a kettle to boil water for the tea or a pot to cook. Even in the 1990s the cottage had no electricity and I'm not even certain that it had running water.

From as far back as I can remember, Kathleen lived entirely alone, with just her old sheepdog for company. She died in 1998 at the age of 97. It must have been a lonely existence and yet a more warm-hearted, happier person you couldn't hope to meet. On our way to visit my grandparents who lived close to Kathleen, we would regularly pass her bringing her cattle down the road. She always wore an old black cap on her head and an overcoat over her long black skirts and thick wellington boots and never failed to raise her stick in greeting and smile a toothless smile as we passed.

I feel privileged to have something by which to remember such a dear character. It symbolises a simpler and arguably far happier time. People like Kathleen had so little and worked so hard but yet I never recall her being anything other than cheerful. As we all bemoan the lockdown and long to jump on a plane to faraway shores, Kathleen's little wax jack reminds me of what is really important. She was a lady who never drove a car, never mind travelled in a plane. She had everything she desired or needed right on her doorstep in her little pocket of Ireland. When I get the wax taper that I ordered today, I will light it in honour of an old lady who lived a very simple life but one that was long, rich and happy.