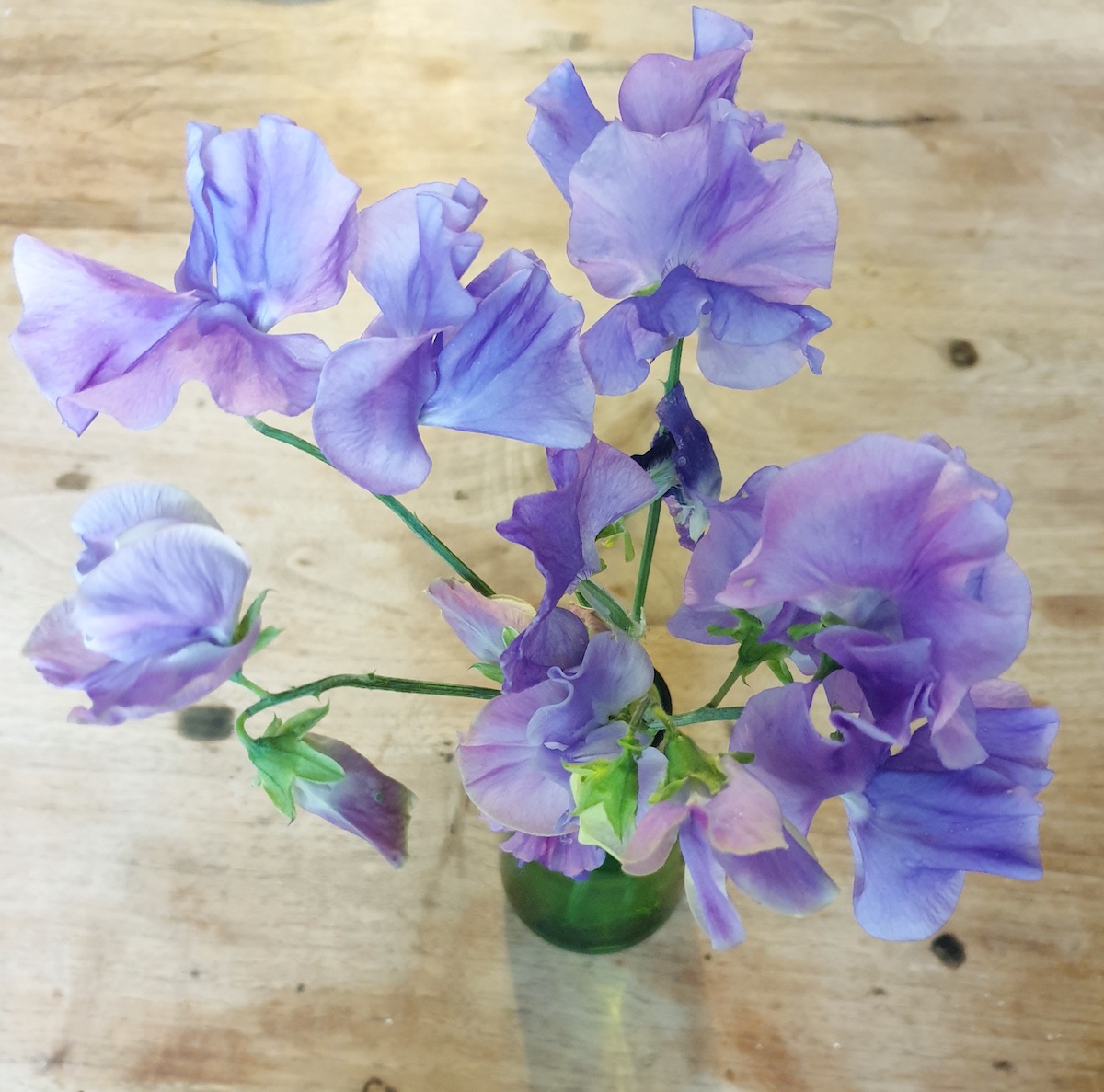 The sweet peas are climbing up the trellis now, their tendrils reaching out to the wooden supports like the hands of a drowning man towards his rescuer. The plants are stronger than last years. Last year’s sweet peas were grown from seeds I harvested from the plant outside my Dad’s hospice room in the autumn of 2019, intending to grow them in his memory. And I did. They produced two small crops of pale purple blooms in early summer, just enough to fill a tiny Ikea bud vase. But having those two little crops was enough for me. After that they struggled against an attack of green fly and, I suspect, root rot, their lower leaves turning yellow. Even the ladybirds that I lifted over from the roses to feast on the green fly showed no interest at all and migrated back across the garden to the more attractive plants. I couldn’t save the sweet peas no matter what I did. They produced the odd, small flower for the rest of the summer, but they were weak and sickly. This year, however, the plants are strong and vigorous despite not having received anything like the attention I gave to last year’s. Perhaps they reflect my stronger state this year. That must be it. Things are better this year.

I have a special fondness for sweet peas. My grandmother, Rose, grew wonderful ones, without any great effort. But then she had that way with all plants. They just seemed to flourish for her. She would have a little jug of sweet peas on the table in her living room. She didn’t go in for ostentatious bouquets of flowers, just the few sweet peas in the jug. She hated lilies in particular – harbingers of death, funeral flowers, she called them. If anyone arrived at her door with a bouquet that had lilies in it, she’d turn her head to the side and raise her hand in a stop gesture “I can’t have those in the house”. On one occasion I specifically recall her greeting a visitor bearing a bunch of lilies with "well, those are going straight in the bin". She never minced her words. She believed in being honest, too honest sometimes. The death flowers were not allowed across her threshold and that was that.

A few of her peculiarities have rubbed off on me too. There are some things you just never forget, and her aversion to lilies has stayed with me so that I’m not a fan of them either although not because of any bad omens that I think they represent. I find their fragrance overpowering, it reminds me of hospitals, and I dislike the fact that their pollen stains my clothes or skin if I happen to rub against it. But really, I just prefer more delicate flowers like freesias, and wildflowers like cornflowers. Flowers that you find in meadows and along country ditches and hedgerows. I did a little bit of experimenting with flower arranging recently, just to see if I could. But my little coach house doesn’t wear flamboyant flower displays well. They are out of place. So, now I’m back to jugs of garden flowers again, their whimsicality sits better in the modest surroundings than large bouquets. I like sweet peas because the more you cut the flowers the more flowers grow. It’s a mutually beneficial process.

As a child I was amused and often irritated by my granny’s idiosyncrasies, and she had many. She was an extremely proud woman with a formidable aura, whose very presence made a lot of people very nervous and a little in awe. She had lost her mother when she was just eleven and her coping mechanism was to put up a barrier, never expressing emotion publicly, always stoic, proud, uncompromising. She wasn’t your typical grandmother, bouncing grandchildren on her knee, telling stories, the sort that has a soft, kindly face and fusses over her flock. She was tall, straight-backed and walked in strides, usually several feet ahead of my grandfather. I don’t believe she was your typical mother either. Her children - my father and his siblings - were raised well, in the sense that they were well fed, nicely turned out, spick and span, got good educations and wanted for nothing. But the warmth, affection and emotional support that they received came from aunts, uncles and close neighbours, of which there were many. Yet behind that cool exterior my granny was kind and thoughtful.

I remember the little walking stick that she bought me when I was about three or four because I loved the walking stick that she carried as she strode around her garden, pointing out flowers to me, using it to beat back weeds or poke at brambles to get blackberries. And I remember the sheepskin rugs that she brought me from her holidays in the west and south of Ireland because I was always admiring a sheepskin rug that she had in her ‘good’ room. The 'good' room was never used - a small, square room full of display cases with trinkets from her travels, an uncomfortable settee and a magnificent Christmas cactus that cascaded down from its pot on the top of a cabinet but that no one ever saw because no one ever went into that room, apart from my granny, and me on the odd occasion that I would ask her if I could look at her collection of silver spoons with their little enamel crests from towns she had visited on a cruise down the Rhine.

And I remember that she always had a few bars of chocolate in a drawer in her bookcase and a variety of fizzy drinks – Lucozade, Cidona and Cream soda in the cupboard to the left of her kitchen sink, drinks that we never had in our house, where 7up or Club orange or Coke were the norm. And I remember how she would explain to me the system of the cryptic crossword that she did every night in the ‘Evening Press’ or let me help her with the jigsaws that she laboured over on her living room table and hid away under the thick table protector and table-cloth. I definitely inherited my love of puzzling from her.

And then there was her Sunday morning ritual of changing her bedlinen and showing me how to make the bed the correct way. She was fastidious about her bed-making. Those were the days before duvets when you had a bottom sheet, a top sheet, blankets and a bedspread. Each layer had to be absolutely perfect, smoothed out so that not a single crease was in evidence, the top sheet folded back over the blankets and the whole lot tucked in tightly. And finally the bedspread was pulled right up over the pillows and then creased by running the side of one's hand along the width of the bed just beneath the pillows. It was a serious business and I felt quite privileged to be allowed to help.

I also remember her collection of hats and her assertion that “a lady isn’t properly dressed without a hat”. She always wore a hat to Sunday mass and to Sunday lunch. And then, suddenly, from one day to the next, in my early teens, she abandoned her hats and ridiculed the whole idea of them. Sometimes she was capable of surprising you. Not often. But on those rare occasions that she did an unexpected u-turn, she was steadfast in her conviction. “But are you not wearing a hat?” “Why would I wear a hat, such an old-fashioned idea?” “Well, you wore one last week?” And then she’d throw you that sideways glance as though you were talking utter nonsense. And you had no choice but to drop the subject. She had that way about her. My Dad, who was nothing like her, had that same little habit of glancing at you sideways, cocking an eyebrow and twisting his mouth as if to say, “I give up, you’ll never understand”. And I’ve noticed that I do it too. It’s much more effective than words, completely dismissing the matter at hand with a mere glance so that a verbal retort is rendered utterly pointless.

Some years ago, when buying plants for our first garden, my husband picked out a variegated plant and I recoiled in horror and announced that I hate plants with variegated leaves. I also steered him away from geraniums and hydrangeas. More recently I’ve allowed geraniums and hydrangeas back into our garden, but I have continued to resist variegated plants (although we did inherit one that was in this garden when we bought the house). Last weekend while visiting the Botanic Gardens in Dublin I saw a variegated holly bush and suddenly realised that it didn’t have the same effect on me and that, in fact, I was drawn to it. As I wandered around the gardens and pondered this, I came to the conclusion that what I had been feeling all these years was not dislike of these plants at all but sadness, sadness for those days spent with my little walking stick poking at brambles with my granny, strolling by her large front window, its sill lined with pots of crimson geraniums, walking up the wide path at the side of her house, passing the big, variegated holly bush on my right. She may not have been a granny who bounced you on her knee or read you stories, she may not have hugged your warmly or showered you with affection, but she was, in her own unconventional way, as attentive and loving to me as any regular granny.