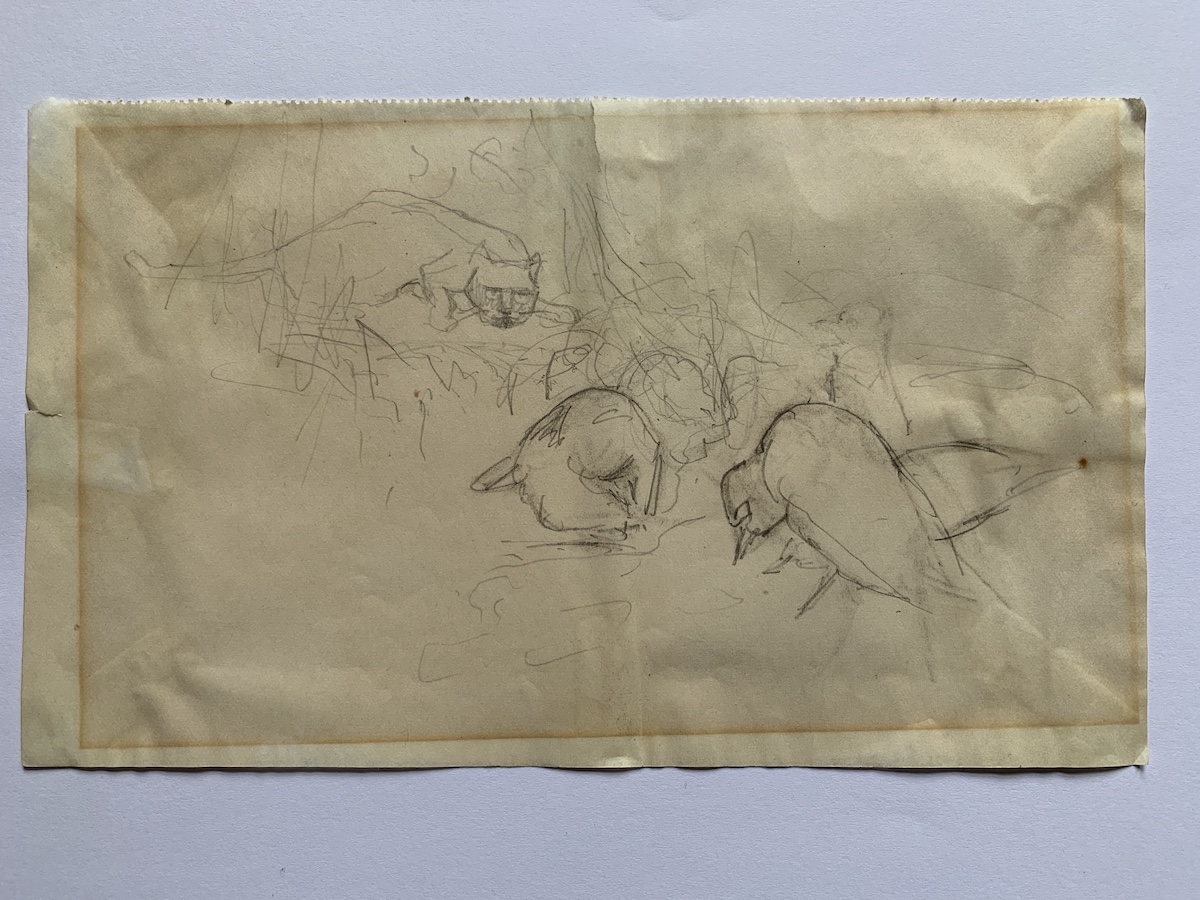 I think I mentioned in a previous blog post that I bought a little pencil sketch at an online auction that I attended a few weeks ago. I hadn't intended to buy it. In fact, I hadn't even noticed it when perusing the catalogue, but as I was waiting for some of the lots that I was actually interested in to come up, I was keeping an eye on the bits in between and suddenly this little sketch appeared. It's by Mildred Anne Butler, a very well-known late 19th/early 20th century Irish artist, and the simplicity of it and of course the subject (a cat stalking some crows) appealed to me so I bid on it and got it.

When it arrived, my initial reaction was "caveat emptor, you fool" because it was in pretty bad shape. I was annoyed with myself for being so impulsive. What immediately jumped out at me was the pieces of sellotape showing through the delicate paper. It had obviously been sellotaped to its mounting to hold it in place. The back of the frame had the sticker of a reputable gallery on it with the name of the work, the artist and a catalogue number so I was happy at least that it was genuine. Anyway, I'm familiar with the artist and I recognised her work so I knew I hadn't been sold a complete dud. But the condition was appalling.

I decided to see what could be done and opened up the frame and removed the sketch. Sure enough, it had been sellotaped, and a long time ago too because the glue on part of the tape had dried out completely. The paper, almost like tracing paper, was so thin that as the glue had dried, it had actually puckered the paper so it was wavy, as well as having those awful sellotape marks that showed through to the front of the sketch and were so unsightly. What to do? It looked pretty bad in its current condition. Not only was the sellotape tragic, but there was also a brown/rust coloured rim around the edges of the drawing because it had been placed on a backing board without any protection behind it causing this marking at the edge of the mounting. Whoever did it clearly had no clue about how to protect a picture and it just proves to me that you should always seek advice before framing something, especially original paintings or sketches. Oils can withstand a bit of carelessness and don't really need to go behind glass if they are kept at a constant temperature (though I would still urge you to put valuable ones behind glass - better safe than sorry) but watercolours, ink drawings fade/change colour in sunlight and are also prone to damage by air pollutants, heat, acid etc so knowing the correct way to protect them is so important and a good framer will advise.

Anyway, I knew there must be something that I could do to salvage something from this little sketch but it really wasn't worth paying silly money to get it professionally restored so I asked an artist friend what she thought. She was positive. She had saved a few damaged paintings before. There was a risk but to be honest I was happy to take a risk.

White spirts was the first option. I tested some on a teeny bit of the glue. It didn't work or at least I wasn't prepared to rub too hard as the paper was too fragile. Next option - nail varnish remover. Success. It lifted the glue that had dried in and my friend suggested soaking the spots that still had sellotape attached from the front of the sketch. I liberally applied it and then turned it over and applied more on the actual tape and very gently peeled, dabbing more NVR with an ear bud under the bits as I peeled. More success. I got all the sellotape and glue off. Some parts now had liquid stains so my friend suggested dabbing the edges of the stains with more NVR. I did and gradually they vanished as the liquid evaporated. I was thrilled.

Next problem was the wavy paper. We discussed this at length, firstly considering soaking the paper with water and pressing under weights to flatten but when we contemplated the actual quality of the paper (she was in Germany so this was all done over a messaging service), this was deemed too risky. The last thing I wanted was to reduce the sketch to a lump of sodden pulp. So, I decided to just press it under a heavy piece of wood for 24 hours and leave it at that. It may have helped a little, but not enough to make any material difference. It still had the brown rim around it too. But when I placed it against a white background, I realised that I actually liked how it looked, even with all its imperfections, and maybe more so because of them.

I've spoken before about how much I dislike cosmetic enhancements and when people remove any of the character of their faces with excessive botox, fillers etc. And, for me, this was a bit like that. Put it this way, if I got a piece of sellotape stuck to my face, I'd want to remove it but I have no desire to remove my laughter lines because they are part of me, part of my character, and make me who I am today. In the same way, this little sketch has some lumps, bumps and lines and they too add character and charm and set it apart from other sketches. It will never be perfect, it shows its age, but it's unique and beautiful as a result.

So, off I went to my wonderful (truly wonderful) local framers, who have done such excellent work and given such great advice to me previously. They completely agreed with me that it should be framed as it is, without any further efforts to restore it, as an artefact rather than a piece of art, embracing its flaws rather than eliminating them. And isn't that what life should be about? Celebrating the passage of time, celebrating who you are today, your evolving character, battle scars and all. That's my view anyway.

It'll take a few weeks for it to be ready and I can't wait to see it, hang it and rejoice in its character. I feel a sense of achievement that I have given it a new lease of life.

Thank you to Magda Jarzabek for her advice and patience!