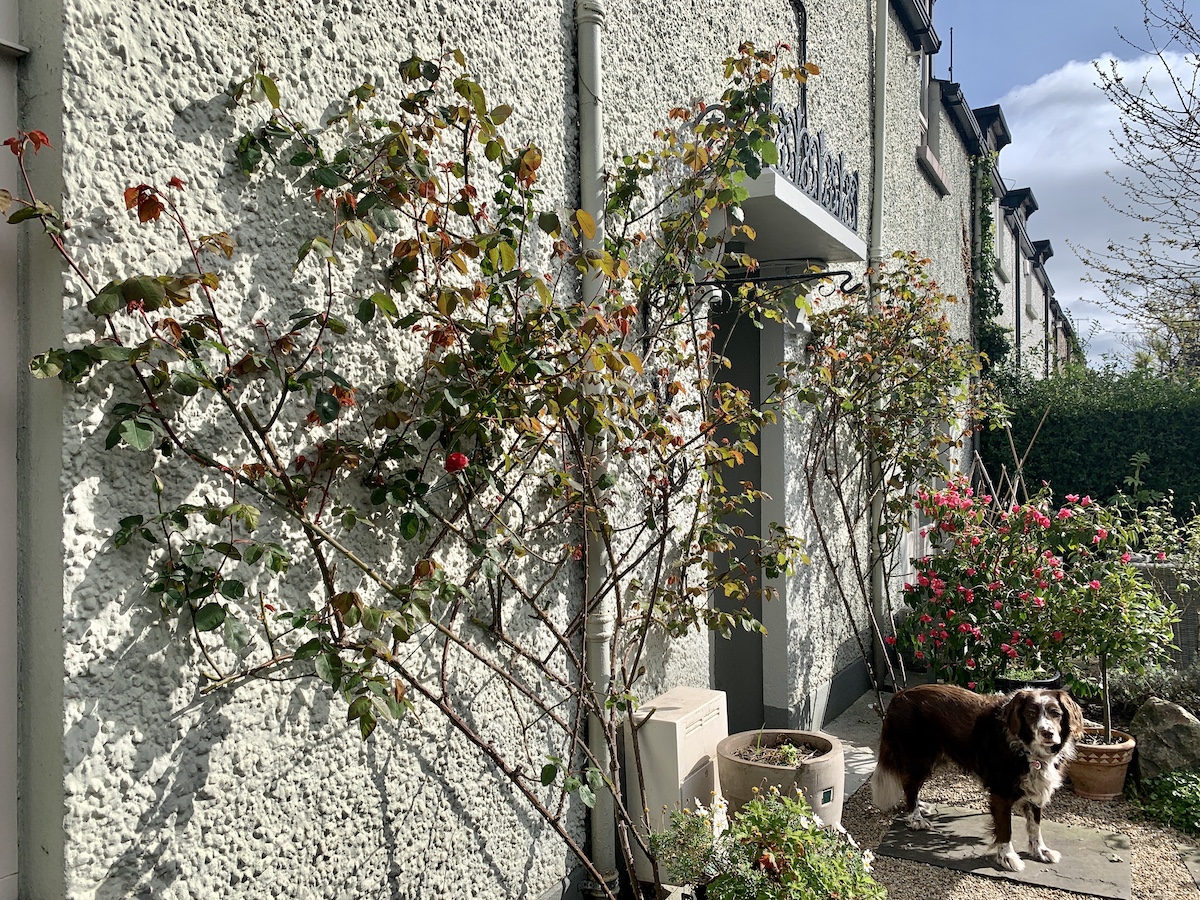 Out of the shadows

We have a little wrought-iron railing feature above our front door that was last painted when we renovated the house eleven years ago. Last weekend we decided to give it the attention it deserves and my husband set about stripping the paint from it, layers upon layers. The house is over 170 years old and, honestly, it looked as though that thing had never been stripped before. I’m not even sure how old it is, whether it is an original feature or added sometime in the early/mid 20th century. It’s certainly old, it’s just not clear how old. But either way, it is really attractive and something that you only really notice when you are across the road from the house because it’s up there above eye level. It was also last painted the same colour as the rest of the house so it blended in and became even less obvious. The buses going past have an excellent view of it though. Anyway, it got me thinking…

I’ve written before elsewhere about observation and how we really don’t notice much of what it right in front of our eyes. It’s something my biology teacher devoted a lesson to one time, when someone was unable to answer a question. She abandoned the subject matter that we had been discussing and asked us all what we had noticed on our way to school that morning. She was met by silence. There ensued a lecture on observation and we were all instructed to look around us as we went to school the following morning. She assured us that we would be amazed by all the things we walked, cycled or drove by every day that we had never noticed before. It was one of the most valuable classes I ever had and it’s a lesson I’ve never forgotten. She was a very smart lady, who, frankly, terrified me with her own observation and intuition skills which involved, among other powers, being able to swing around from her blackboard and pounce on you precisely when you thought she wasn’t aware that you were doing something you shouldn’t be doing.

As a consequence of that particular lesson, I’ve always been a pretty observant person but I am still surprised by the things I miss that are right in front of my eyes. I think much of this has to do with driving, which of course requires a more superficial set of observation skills involving the immediate vicinity of your vehicle. However, since lockdown, I have been walking more, which has made me observe my surroundings in a more focussed manner. I’ve noticed houses that I never noticed before or at least never gave much consideration to, details and features, trees, wildlife and even people. It has been quite literally eye-opening. I’ve noticed a small and incredibly steep set of steps in the centre of a wall that lead up to a terrace of majestic Victorian houses on the sea front. It had never even occurred to me that the houses were set so high up off the road. I've noticed a block of apartments that I swear I've never seen in my 19 years living in this area, despite them being minutes away from my house, and of course at night I’ve even been able to see into houses where the curtain or blinds aren’t drawn and observe the décor and, in some cases, even the people as they watch TV or cook or potter around. I’ve said it before and I’ll say it again, why do people leave their curtains open at night if they have houses whose windows are at road level or apartments whose windows face the windows of other apartments? I’ll never understand it.

But the purpose of this blog wasn’t actually to talk about observing things at road level. It was about looking beyond the obvious.

Some years ago, I was waiting for my husband in my car in a side street in the centre of a town close to where I live. A movement to my right caught my attention and my eyes were drawn upwards to the first floor window of an old red-brick building. There was a dry cleaners at street level, but on the level above a young woman had opened a large sash window and was hanging a piece of fabric over the sill. I watched as she moved back a little from the window and sat down. She was a seamstress, busily working at her sewing machine that was set up adjacent to the window and ironing fabric as she went along. She was using the open window to hang her finished pieces so that they wouldn’t crease. In front of her on a wall, there were rows upon rows of spools of coloured thread. I watched her for about twenty minutes, sewing, ironing, folding, hanging. I watched her holding up completed pieces to consider if she was happy with them, I watched her changing her thread and, eventually, my husband arrived and we left. But it made such an impact on me realising that above all the hustle and bustle of dry cleaners, cafés, butchers, shoe shops and newsagents, there is another world entirely…a slower world, where people are hidden away, quietly and meticulously doing jobs that don’t require a large shop window or heavy footfall or loud promotion or endless meetings or vast amounts of computer equipment.

Who will you find in these windows above street level? Well, people like the seamstress, people who have quietly built up a reputation for craftsmanship, people who you hear about by word of mouth. I remember years ago a stone came out of one of my rings and a work colleague told me about a jeweller who specialised in bespoke jewellery and repairs. I had never heard of him but he, too, was working out of a small, ramshackle, first floor room in a nondescript old building in the centre of the city. He made my friend’s engagement ring and it was a magnificent piece of craftsmanship, unlike any ring I had seen before. It turned out that he also carried out repairs for many of the big jewellery shops in the city that didn’t in fact have any jeweller working on their premises. And what an idyllic life he had, doing what he loved, and doing very well by all accounts, although you would almost have felt sorry for him in his little room, out of sight and mind. And this taught me another lesson. Don’t be fooled by those who shout the loudest, who are the most ostentatious, who drive the flashiest cars or, perhaps I should say, don’t be fooled by those who don’t. Not everyone wants the attention or the pressure that being front and centre brings. Some people like to live under the radar, quietly doing what they love, away from the pressure of conformity and expectations, not feeling the need to impress anyone, and I’ve yet to meet such a person who wasn’t happy.

It took my husband a full day to strip the paint off our feature, back and front, but it was worth it as all the detail emerged, detail that endless coats of paint had obscured. He also changed its colour, though not too drastically. Just enough so that it now catches your eye as you walk in the gate. It has suddenly come out of the shadows, poked its head above the parapet so to speak, just like even the most unassuming people sometimes do to whispers of "I never realised", "did you have any idea?". I just hope that it doesn't mind too much.