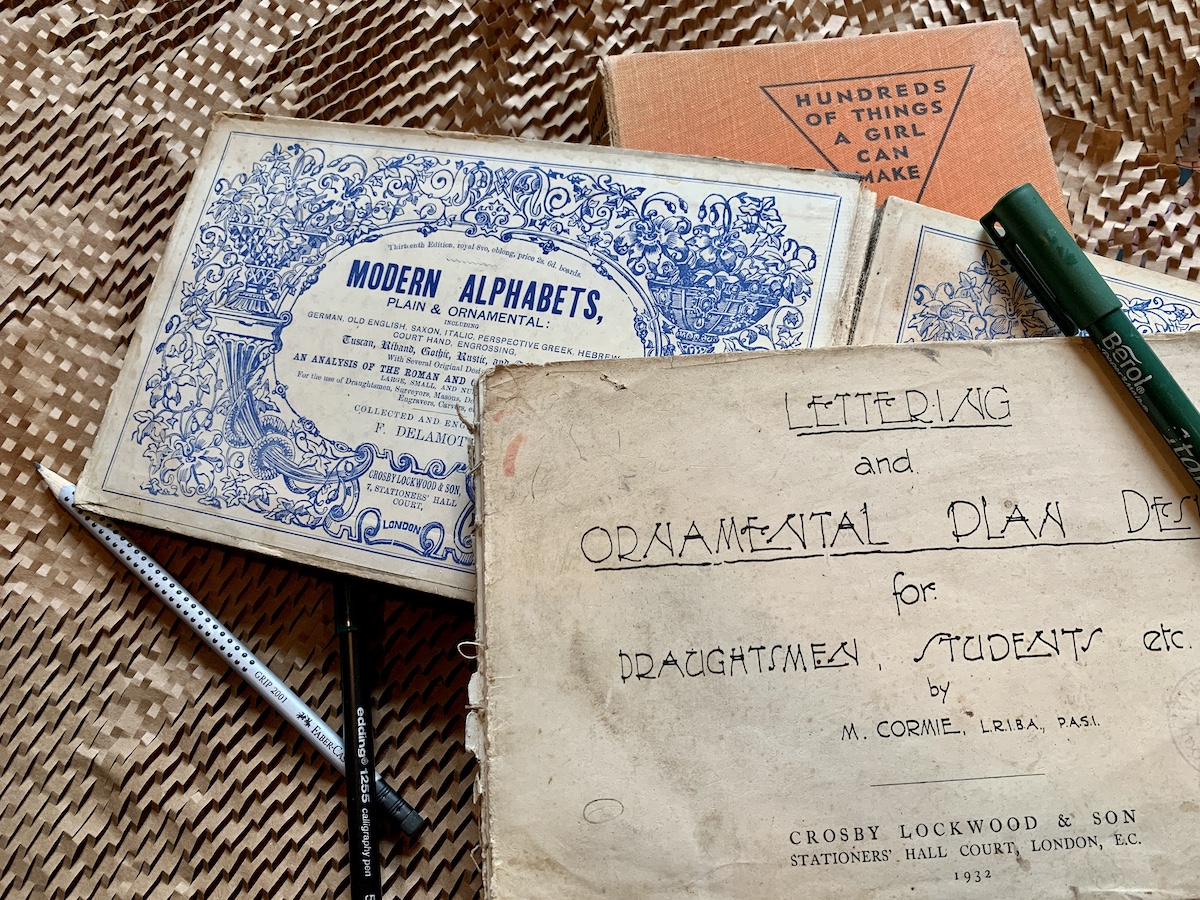 I've been fortunate enough to inherit a lot of old books from relatives and I admit that many of them simply sit on my bookshelves gathering dust. Let's be honest, I'm unlikely to ever need to know about the anatomy of the frog, to take an example of a book that I came across recently. Interestingly, that particular book belonged to a former President of Ireland who was in university with my grand-uncle and of course there's a story to go along with it, so please indulge me for a minute while I go off on a bit of a tangent.

My grand-uncle was a wonderful character, a very talented musician, one of those naturally gifted people who have absolutely no idea just how talented they are. Being bright he went to university to study medicine but after a couple of years realised he had no interest whatsoever in the subject and dropped out, returning to his home town to pursue his true love - carpentry, cabinet-making etc. He had a workshop where he carried on his business, producing staircases, doors, architraves and furniture and I loved going to visit him there as a child, watching the lengths of timber being planed and sawdust flying everywhere. The smell of freshly sawn timber is one of those wonderfully evocative smells that brings me right back in time to that workshop. He led a simple life, producing woodwork by day, playing guitar, banjo and singing in a well-known showband by night and was a regular fixture in a local hostelry with his black labrador, Sooty, who used to sit at the bar drinking Guinness along with his master. My grand-uncle was a wonderful racconteur, hugely entertaining and great company.

Anyway, to get to the point of my story, I need to tell you that my parents were part of a small group of people (seven in total) who decided to set up an arts group that strove to inject some culture into life in my home town by bringing renowned classical artists to perform in a local auditorium. It was quite a feat to have nationally, and in some cases internationally acclaimed musicians, singers, orchestras and opera companies of the period in our provincial town, and it was a particular coup when the then President of Ireland came to one of the events. On the night in question, he arrived at the venue and my father greeted him and introduced himself. The President stopped for a moment, repeated our surname, and then asked my father was he any relation to my grand-uncle? "Indeed I am", answered my stunned father, "he's my uncle". Upon hearing this, the President spoke warmly of his fondness for my grand-uncle who, it turned out, had been in his class in university. He then made my father promise that he would tell my grand-uncle to get in touch as he would love to see him again and to invite him to visit Áras an Uachtaráin, the home of the President in Dublin's Phoenix Park. My Dad passed on the invitation but, needless to say, my grand-uncle never did get in touch. That was his way. He had never mentioned even knowing the President and so it was no surprise that he passed up the opportunity to visit him. My grand-uncle was unassuming, humble and one of those people who wanted the quiet life, doing what he loved without fuss or ceremony. I'd hardly believe it but for the fact that I possess the President's medical book 'The Anatomy of the Frog' with his name on the inside cover!

So, even some of the books that I may never in fact read or use are precious to me. Not because they have any monetary value but because regardless of the actual stories that they tell, other stories unfold beyond their pages, stories of a person, a place or a time, be it a simple name written in cursive inside the cover or a letter stuck between the pages.

Yesterday, while pondering this subject, I took a book down from my shelf. It had no name on the spine. It was a book on the history of railways in Ireland, a very old book that my father got rebound because its cover was in such a poor state of repair. As I flicked through it a piece of paper fell out, a letter from an old friend of my Dad, an historian. At the time that the letter was written many years ago, he had just heard my Dad being interviewed on the local radio and had written this very lovely letter of encouragement. It's a letter that would mean little to most people but to me it was touching, knowing that my Dad must have appreciated the encouraging words and support so much that he kept the letter. I tucked the folded sheet of paper back into the book and replaced it on the shelf.

Of course I have lots of the classics - old copies of Dickens novels or Shakespeare plays for example, and children's books such as the complete tales of Beatrix Potter. Then there are the books that are rich with information, with things you are unlikely to find now, even with access to the world wide web. I have a book of herbal remedies for example, printed in 1810, and it's astonishing to see just how many of these old remedies have come back into vogue in recent years and now feature in all sorts of modern applications. Last year I consulted it when I was collecting elderflowers in our garden to make cordial and wondered if elderflower had any medicinal properties. It turned out that it has, both for skin conditions and all sorts of other ailments. I made an elderflower salve as a result and I can attest to its curative properties. At some stage I will devote another post to this subject.

But my favourite old books are the three featured in the photograph at the heading of this post. They are my favourites because of their practical uses. I have always loved handwriting and many years ago as a child I was given a little book, more a manual really, of 'Lettering and Ornamental Plan Design' that belonged to another grand-uncle who was a draughtsman and a teacher of technical drawing. I latched onto it straight away and spent hours perfecting some of the scripts and scrolls in it. It gave me a great appreciation for the meticulous manner in which people used to decorate old documents, something I first witnessed when, as a teenager, I spent a summer in my Dad's legal practice re-organising the record room where all the old documents were stored. I also have a box of ancient deeds, some dating to as far back as the late 18th century, that my Dad salvaged when they were no longer in use. They are handwritten and painstakingly decorated, and I think of the patience that one must have had to possess to devote so much time and attention to what was in those days a rather menial task. Anyway, my little 'Lettering and Ornamental Plan Design' manual is one of those things that I treasure and use again and again. I've consulted it when designing posters for events in my children's school, I used it in college, I've even decorated birthday cards with its guidance. And in recent years it has been joined by another old book of calligraphy that my mother-in-law gave me and that has another plethora of scripts that my original book doesn't have.

The final book, 'Hundreds Of Things A Girl Can Make', is one that I was given as a child by my Dad who got it in a collection of books at the auction of an old stately home. It is a craftsperson's dream book and it amazes me with the skilful and useful things that it contains, from basket-weaving to carpentry. I kid you not - there are two pages devoted to making a wardrobe! And I don't mean a flatpack from Ikea! Flicking through it a few moments ago I noticed a page about book-binding. That's one I intend to try out because my 'Lettering and Ornamental Plan Design' lost its cover before it ever reached my hands.

There are books in my collection that should, by rights, be in a library and at some stage I will get around to cataloguing and deciding where to donate them. There are also books that cancel culture would decree should probably be flung on a bonfire. However, I happen to think that they are an important snapshot of history that show us just how far we have progressed as a society.

For now though, picking a random book from my shelves is a little like opening a box of After Eight mints from which people have removed the chocolates but left the little black envelopes that each thin slice comes in. You have to rifle through them in the hope that there is still a chocolate in there somewhere among all the empty wrappers. And, oh, what a feeling when you find one! It's the same with old books. There are always treasures in there, whether the contents of the actual book, whether an ancient pressed flower that speaks of a simple summer day and conjures up a whole world that has long since been forgotten, or an inscription that gives a flavour of the former owner. And for me, those little snippets of information fuel my imagination and connect me to a person, place or time that I never knew nor witnessed but that I feel is just a whisper away if one listens closely enough.