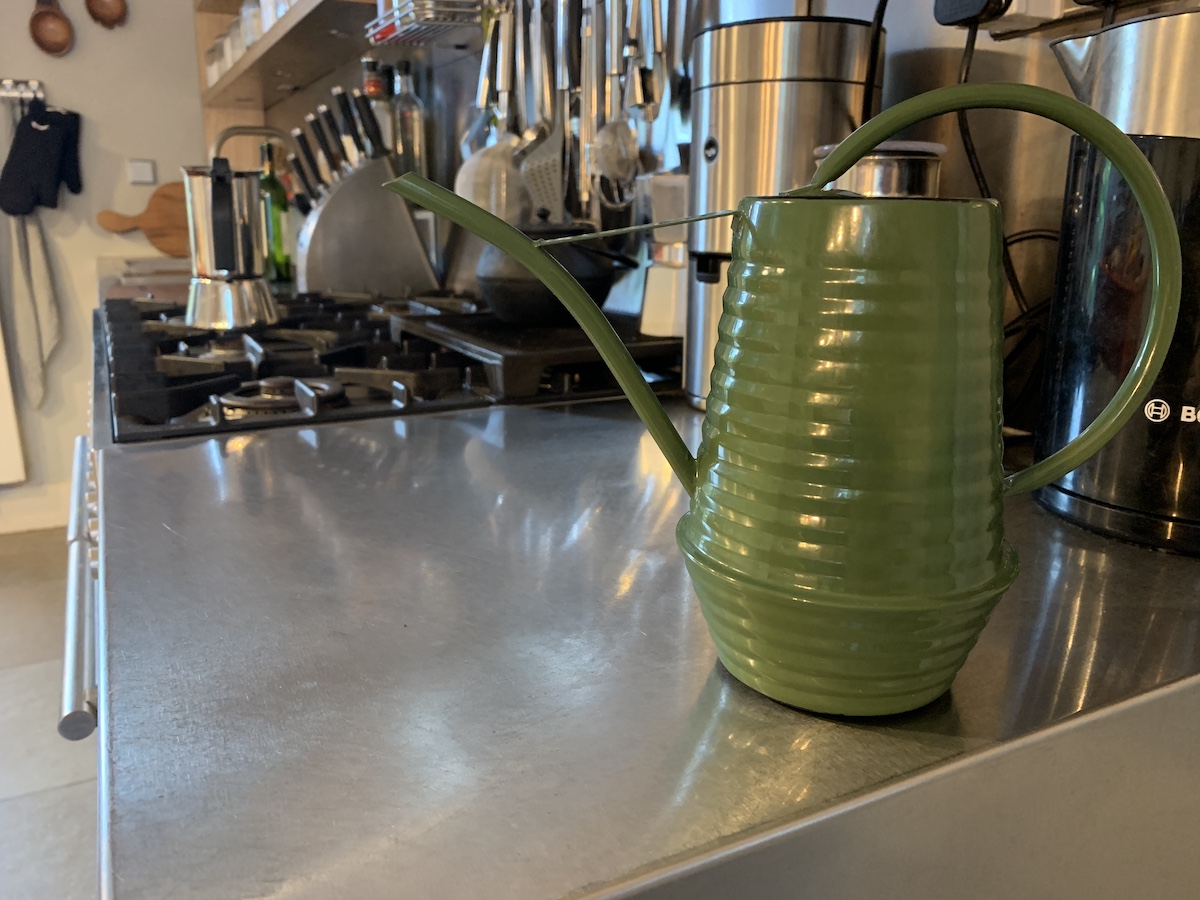 I’ve been hosting a 10-day Instagram challenge this week where people put up photographs each day that fit the day’s theme. I came up with the challenge because I am interested in people and in what makes them tick and of course I was also hoping that some of the items would have an interesting backstory.

One of the themes I chose was ‘favourite kitchen implement’ and one of my friends posted a photograph of a dough scraper, which is a really handy little item. You know when you make dough and roll it and bits of dough and flour stick to your worktop? Well, rather than scrubbing at them with a kitchen sponge and making a right mess on the sponge, this quickly and efficiently lifts the dough off, so you just have to wipe the worktop down afterwards. You can also use it to cut dough, lift pastry and scoop up chopped garlic or onions. It’s generally a very versatile little utensil. Cutting the dough with it is something I know would really please me in that utilitarian sense of a very mundane looking item just working well, no bells and whistles, nothing superfluous. I am a fan of simple things that just do a job without any fuss. And I also admit to imagining how satisfying it is to cut into yeasty, fluffy dough with a chunky, square blade.

Anyway, every time I see a dough scraper used by someone, I mean to get one and then forget. When my friend put up her photo, I remembered again! And then I remembered that there are lots of things that I keep meaning to get but that go right out of my head a minute later. I intend to write down the item when it occurs to me but I don't and that's the end of it until I see one of them again. In fact I did keep a list like that a few years ago but forgot where I wrote it! So, I thought if I do a quick round-up of those ‘keep meaning to buy’ items here, I’ll never again forget. I’ve also included a couple that I kept meaning to buy and eventually did. Let’s start with those.

A small, indoor plant watering can with a long, curved spout

It’s been in my head for years and every time I watered my indoor plants, I got irritated because the jug I’d use wouldn’t go right into the heart of the plant. The water would splash everywhere. Anyway, I finally spotted the perfect one in my local garden centre before Christmas and bought it. It is such a joy to be able to direct water right into those leafy, indoor plants. Great buy and it’s really pretty too!

My mum got me one years ago and I never used it. Well, since getting rid of my ricer I’ve kept seeing chefs using them and recipes that recommend them, so I’ve been meaning to buy another. Last week I was reminded again when I saw a delicious recipe for gnocchi and it recommended using a potato ricer to crush the potatoes so, being someone who strives for the best where food/recipes are concerned, I decided not to procrastinate and risk forgetting again. I went straight out and bought the ricer. I’m honestly not a big gadget person. I don’t even own a microwave (I did, but I disliked the idea of radiation in my kitchen and, having had one, I now realise that I can do anything pretty quickly on a hob or in an oven that a microwave can do). I ended up giving my last one away. Anyway, once I committed to getting the ricer, I was determined to use it and, I have to say, the gnocchi were a triumph. As well as that, mash potatoes are one of my favourite comfort foods so naturally I want the fluffiest, creamiest mash that it’s possible to create and, trust me, there is a difference with the ricer.

A comfortable, pair of all-purpose scissors

I’ve yet to find one. I’ve several uncomfortable ones that are all awful, blunt easily etc. I need to invest in a good pair. Let’s face it, scissors are one of the most used household items, so I think it makes sense to get a pair that go the distance. And by the way I struggled with the grammar here. I thought scissors were treated as a singular but apparently, although they are one item, they are in fact what is called a plural tantum – a plural form that represents a singular object. Clear? Hmmm…moving swifting on…

It’s got to be done. When we last changed our car, the time just wasn’t right. They were all stupidly overpriced and the range was appalling. But next car…definitely. Diesel is just bad full stop, petrol isn’t that much better and hybrids still require petrol. We currently have a petrol SUV. We were persuaded to buy a diesel before that and have never forgiven ourselves for being that gullible - CO2 emissions were lower but no one mentioned that the particulate emissions were bad for the environment and bad for the engine as well. So after years of spending an absolute fortune getting the engine attended to, we finally decided enough was enough. The only good thing about owning a diesel car is that you become an expert as far as engines are concerned. Anyhow, lockdown has made us realise that we just don’t need a car all that much and can certainly manage perfectly well with a smaller, electric one. Lockdown has also made us realise we don’t need a lot of things (I know, I know, a potato ricer? A dough scraper? Really?) So, now we are at the point that we are willing, and actively want to downsize our car, as long as any we buy has room in the boot for the dog and a couple of suitcases. When we had three young children and all their paraphernalia, something bigger made sense. Now, it makes no sense. We want to do right by the environment and, to be fair, we've always tried to do our bit - we were a single-car family forever (thanks to one of us always working from home and both of us in recent years) but now one of our daughters has her own car so there's really no excuse for us not to go that extra mile (pardon the pun). Will I forget this when the time comes to change our car? Actually, we’re test driving one this afternoon! That time has arrived!

I’ve had a set of kitchen knives for the past twelve years and they’ve lasted pretty well but the rubber handle coverings are wearing off several and they just aren’t as good as they used to be. They weren’t the most expensive knives ever when I bought them but nor were they cheap. Anyway, I’ve been intending to invest in a new set but in this case, rather than forgetting, I'm actually procrastinating because I can't decide which are best. I cook a lot and so knives are important to me. I’m conscious too that I don’t need as many as I currently own. I have seven in my set and never use three of them. So, a bread knife is a must, as is a chef’s knife that does pretty much everything, and a smaller utility knife.

A shelf for my hall

You know the sort that you have a bowl on for keys, shopping vouchers and other random bits and pieces (masks these days). My husband has been promising to make one to my specifications but there’s always something else to be done first and I keep forgetting to remind him! I want a really neat one in walnut with a shallow drawer underneath.

This harks back to my childhood. In my childhood garden, we had a lovely wrought-iron arch that had wild roses and clematis growing over it. Here, our front garden is sort of divided into two rough halves, one half has an outdoor seated area and flower beds around its periphery. The other part has a magnolia tree and various other bushes plus this is where we park our car (I wish we didn't have to as it would give us more usable garden space but unfortunately living in the city suburbs it's just safer behind a gate). The entire garden is gravelled with flagstones leading from the gate around the car area and into the seated area. So, I thought an arch would work really nicely as an entrance right there where one half of the garden meets the other. The problem is I can’t find a nice one and because I can’t, I keep forgetting about it. Ideally, I’d like an old-fashioned, decorative one that suits the era of the house, Victorian 1850s.

Two of my daughters have been asking for these for years (the two that have bedrooms at the front of the house, which is south facing and therefore gets the most light). I keep forgetting, maybe on purpose. Do I really want them to stay in bed for most of the day, especially now when they can't really go anywhere? Hmmm...

I actually won’t forget about this because I use it constantly and now that I don’t have a suitable one, I find it very annoying. The bedside table/unit I had was a handy little round piece by Kartell, with two siding doors. However, I’ve given it to my eldest daughter who was looking for a neat bedside table with storage. Why did I give her mine rather than buying her one? Well, the truth is I found the round top awkward. The things I like to have beside me – a book, my glasses, a glass of water or cup of tea, a pen and notebook didn’t fit well on it. So, I’m now on the lookout for something square-topped, attractive and with storage. While we were originally looking for bedside tables/lockers to suit, my husband starting using a little chair from Ikea, that belonged to the girls when they were small, as a stop-gap solution. It was just the right height for the bed and worked well for his alarm clock and book. I painted it to match our room scheme because it looked too much like, well, a kid's chair from IKEA. Anyway, he liked it so much that he kept it when I bought my Kartell piece. And I have to say it’s very functional and suits our slightly eclectic tastes. And now that I think of it, I’ve got an item for today’s Instagram challenge theme “new lease of life”. But as far as my bedside needs go, I need a bit more storage, so the chair won’t work for me.

I know there are lots of other items that I’ve forgotten and that will occur to me as soon as I post this. Feel free to pop onto my Instagram and mention any that you’ve been meaning to get. I’m pretty certain that they’ll be things that are on my list too. I find that when friends mention items, I invariably go “thank you, you’ve just reminded me”.