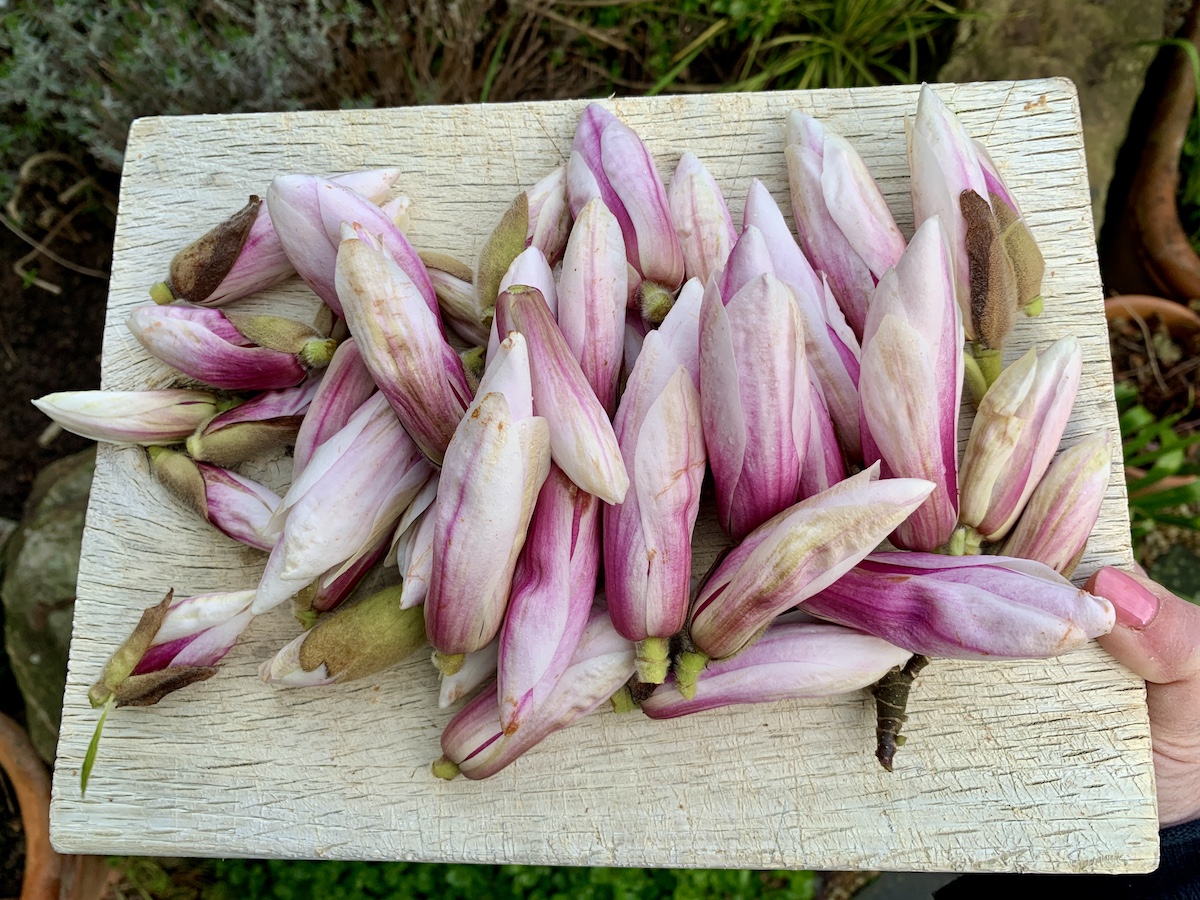 I was delighted to see my magnolia tree covered in blossoms this week, possibly the finest crop that it has had for several years. And while googling magnolias and how to care for them (because we've never done anything with this tree), I happened upon a recipe for pickling magnolia flowers! Wait! What? Magnolia flowers are edible? I stopped in my tracks and, forgetting entirely about the care of the tree, I started investigating the flowers instead.

The blooms only last for a week or thereabouts so I had no time to waste and literally dropped everything and went out to the garden and collected as many young buds as I could reach without a ladder. The young buds (before the flower starts opening) are the best although you can use the more mature flowers as well. These just have a more bitter flavour. All the recipes for pickling were pretty similar using rice wine vinegar or white wine vinegar, sugar and salt. You can pickle the buds as they are or snap the petals off, chop them up etc. I used the full buds just because they would be a little more robust and substantial when served. They go really well with cheese apparently and we love cheese in our house so this was music to my ears. They need to soak for at least 24 hours so I haven't tasted them yet but I'm hopeful. They apparently have a mildly ginger flavour. Happy days, we love ginger too. I've more good news about magnolia but first here's the process for the pickled version:

Put the ingredients in a saucepan and cook until the sugar and salt have dissolved but make sure the liquid doesn't come to the boil. Remove from the heat. Meanwhile, remove the hairy sepals and stalks from the magnolia blooms and rinse them gently in water. Then stuff as many as you can into a Kilner jar or similar vessel (one with a sealable lid) and pour the vinegar concoction in so that it covers all the magnolias. Shut the lid and leave to pickle for at least 24 hours. The buds/petals turn brown which is a bit of a disappointment as I had hopes of them retaining their pretty pale pink colour. Unfortunately not. But, hey, if they taste good, I'm not going to turn up my nose at them.

Now, here's the even better news...

Once I had made my pickled magnolia, I figured if these things are edible, then there must be other uses for them and off I went to my ancient herbal remedy book. Nothing! I think this has to do with the fact that at the time the book was written in 1810, magnolia was probably largely unknown in this part of the world, being at that time predominantly found in Asia, specifically China and Japan, with some species also appearing in North America. Back to google I returned and discovered that the genus pre-dates bees, with some species belonging to it dating back some 95 million years! I had no idea my pretty little tree had such an impressive lineage! Of course the Chinese and Japanese have known about the curative powers of magnolia for a long time and the bark and flowers have been widely used in Chinese and Japanese medicine for thousands of years. But to what end?

Well, there's no bad news here at all. Magnolia flowers have been used to treat nasal/sinus issues, sinus headaches and anxiety*. Great news for me as I suffer from sinus problems. The petals are taken orally in the form of tea and you simply soak them in freshly boiled water for 24 hours, strain and drink. You can also make smoothies with the tea. I found one recipe that suggested adding it to raspberries, chia seeds and lemon juice. I guess it could be added to anything and it's a matter of trying out different things. I like the idea of mixing it with blended peaches for example and making ice pops. I'm going to see how the tea tastes first of all and then experiment.

The bark of the tree is where the serious curative powers are contained and in Chinese medicine the bark has been used to treat gastrointestinal disorders, depression, nervous disorders among others.

But I'm not about to start hacking off bits of the bark of my poor tree so I'll just enjoy the flower power and if it sorts out my sinuses, I can tell you I'll be a very happy bunny. I will report in due course.

*I'm not a doctor so if you suffer from anxiety and are taking any calming medications, please do consult your doctor before using any additional remedies, herbal or otherwise, such as magnolia.