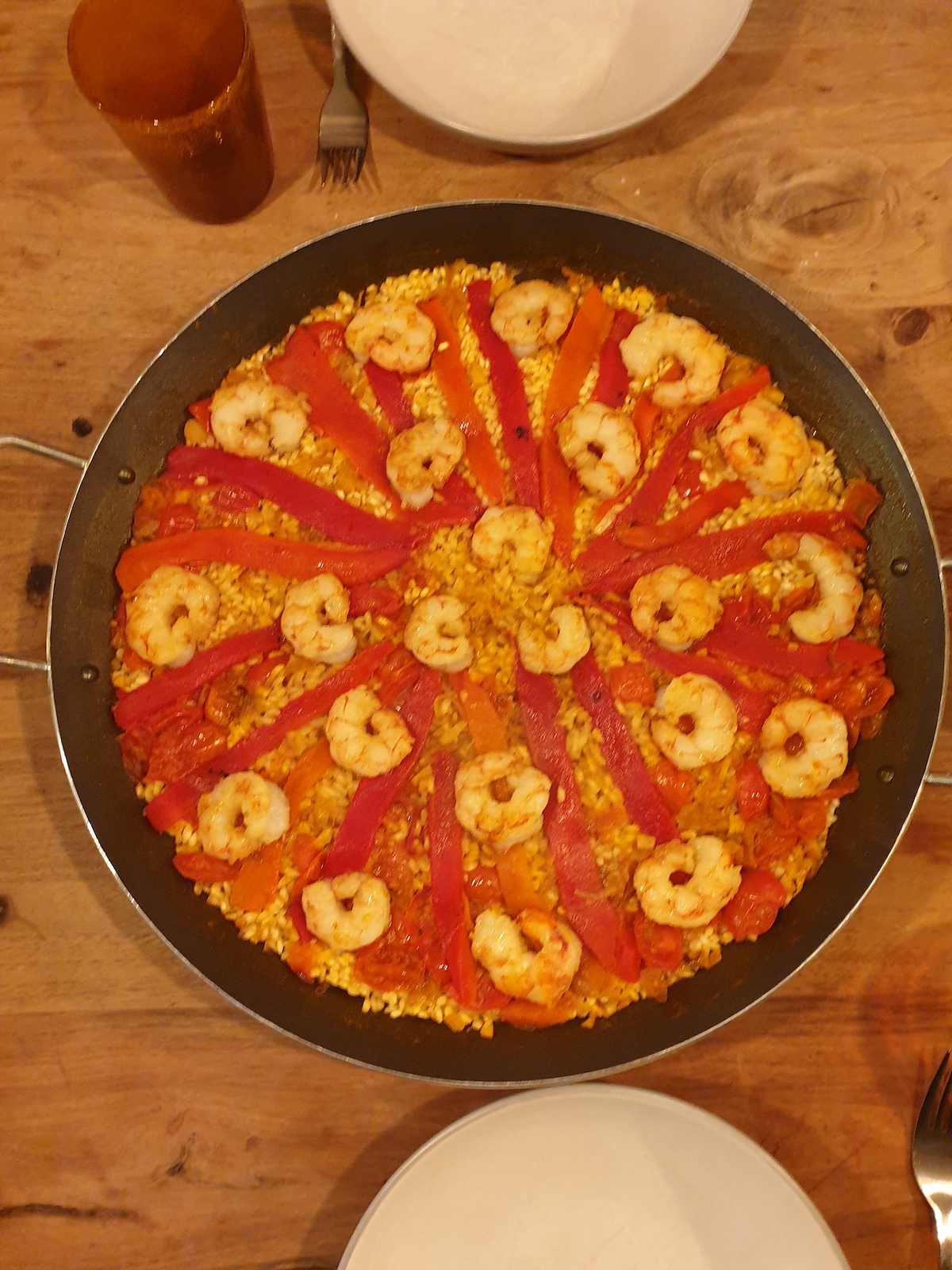 This is the perfect dish for when you’ve got a gang of friends around. An easy and colourful supper to bring a smile when the world opens up and we can welcome people into our homes again. It looks sensational and tastes even better than it looks. Plus I just think that when you're catching up with friends, the last thing you want to be doing is juggling pots of food and trying to ensure things are ready at the same time. 'One pot does the lot', that's my motto.

The main thing about paella is that you have to achieve that all-important crusted bottom on the rice (socarrat). The magic happens when all the liquid has been absorbed and the rice pretty much begins to stick to the pan and caramelise. If the rice isn't pockmarked and starting to sizzle very slightly, then it’s not ready.

Contrary to popular opinion, paella is not in fact a seafood dish. The original paella from Valencia is made with chicken, rabbit, beans and snails. However, much like risotto in Italy, I say paella is really about the rice base and the bits that make the rice sing - shallots, garlic, pimenton, saffron and cooking liquid. After that, do what you will with it. If you like meat, use a chicken stock as the cooking liquid. If fish is your preference (I like monkfish or fat, juicy prawns or any fish with robust flesh), use a fish stock to cook the rice.

I love this take on paella from Rick Stein. He uses monkfish but I couldn’t get it on New Year’s Eve so some wild, extra-large prawns were a fitting substitute. I also like to cook the fish first (some commentators cook it in a separate pan just before serving) because the juices season your pan and, as far as I'm concerned, every bit of flavour needs to be cherished. Stein recommends serving this dish with aioli and, being someone who puts mayo on virtually everything, I concur. However, my New Year’s resolution is to eat more healthily so I opted to leave the gloriously, garlicky aioli out and, honestly, I didn’t miss it. Well, maybe just a teeny bit.

1 small bulb of garlic or half a large one, finely chopped

Heat a paella (that’s where the dish got its name – a wide, shallow, thin pan) or, if you haven’t got one, a large frying pan or casserole. Add 2 tbsps oil. Pat your monkfish/prawns dry with kitchen roll, sprinkle with a little pimenton and salt and fry on medium heat for about a minute on each side or until turning colour but not completely cooked through. Remove to a plate.

Add the remaining 2 tbsps of oil to the pan. Lower the heat and gently fry the chopped shallots and garlic for around 7 mins until starting to turn golden but not so long that they crisp or darken. Add the pimenton, chilli, tomatoes and salt and cook on a medium heat for around 7 mins or until the tomatoes break down to create a thick paste.

Meanwhile dissolve your saffron strands in the fish stock and add this liquid to your pan. Bring the liquid to boiling and sprinkle in the rice, stirring to spread it evenly throughout the pan. Cook without stirring for around 7 mins.

Then place the pepper strips evenly on top of the rice and slightly push down into the rice. Reduce the heat to low and continue to cook for 10-15 minutes until all the liquid is absorbed and you hear the rice starting to sizzle a little. Then lay the monkfish/prawns evenly over the rice, turn off the heat, cover the pan and leave for 5 mins.

Bring the entire pan to the table and let everyone help themselves. A dollop of aioli does work really well with this but honestly if you haven’t expected it, you won’t miss it.

Serve with a chilled Rioja for additional kudos.