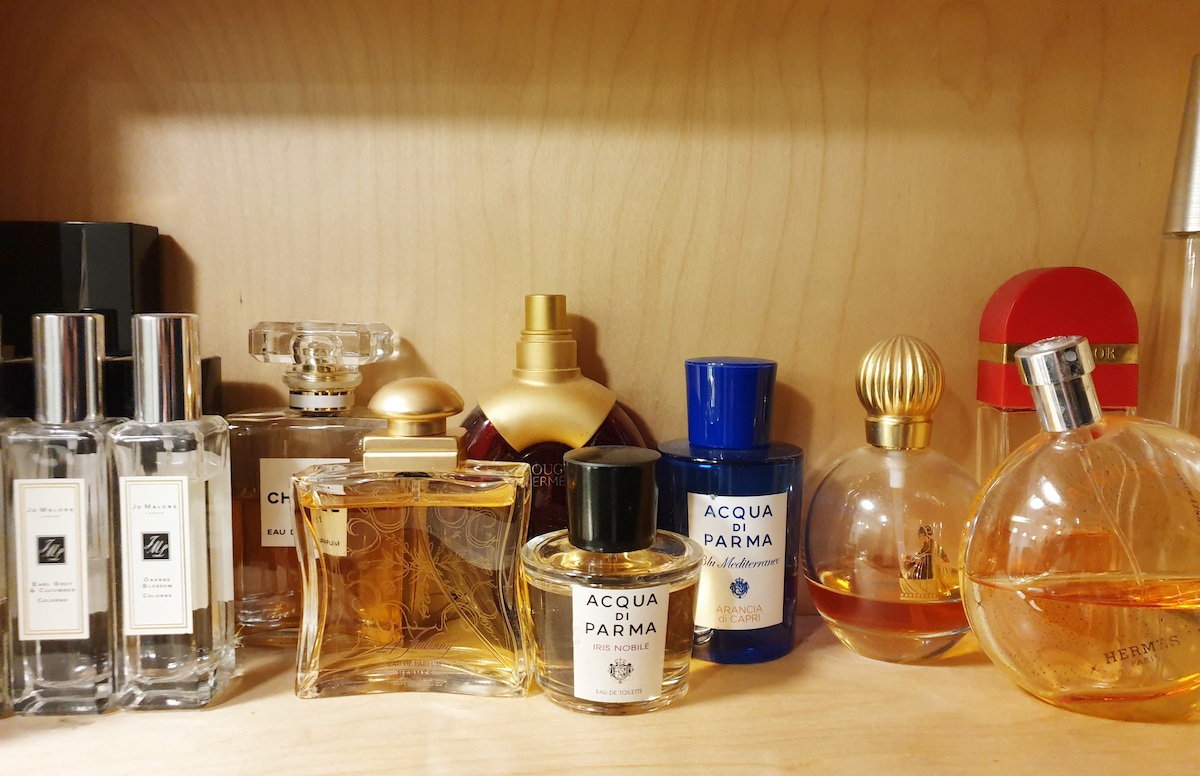 I’ve got a great nose. No, I don’t mean in the literal sense, although, to be fair, it doesn’t embarrass me. What I mean is that my sense of smell is really good. This has its obvious advantages in that even if we didn't have smoke alarms, I’d be unlikely to accidentally burn the house to the ground. Having said that, there was that time about six or seven years ago when I put a load of chicken bones in a pot of water on the hob to make stock and went off about my business, checking on it every few hours. I had put in plenty of water, so it sat there happily simmering away for the day but after dinner I left the kitchen, closing the door behind me, went into the living room to watch TV, shut that door too and promptly forgot about my stock. Our doors are clearly very well fitted because a couple of hours later, I opened the living room door, went into the hall, noticing nothing amiss, opened the kitchen door and was immediately greeted by a room full of dense grey smoke. I couldn’t see a thing but discerned a vague shape under the kitchen table that was closest to me. The poor dog was lying glued to the floor – clever dog, hot air rises so she had flattened herself right down to try and get beneath the smoke. Let me tell you that burning bones create a smell that I never want to experience again in my lifetime. Who would work in a crematorium? It took weeks to completely eliminate the smell, it was on every surface and material. I did everything from washing down surfaces with baking soda and vinegar to boiling lemons but it seemed to have permeated into the walls. Eventually there was nothing for it, we repainted the kitchen. And shampooed the dog!

Apart from burning bones, there are a few other smells that send me into a tailspin. Butter is one. Don’t get me wrong, butter is one of my favourite things to eat. I like nothing better, thickly slathered on warm bread or cold, crunchy toast. Yes, I said cold toast. Think melba toast except that melba toast is wafer thin. Trust me, buttered, cold, crunchy toast is delicious. Of course, the butter must be Irish, Kerrygold. I loved going to visit my grandfather in Italy every summer as a child but the thoughts of several weeks without Kerrygold used to really upset me. The pale, unsalted Italian butter wasn’t in the same league at all. In fact, if Kerrygold was at the top of Serie A, then Italian butter would barely scrape into the Terza Categoria (that’s as low as you can go in Italian football terms)! But the smell of butter on skin, buttery fingers, and I’m running for the hills. I get quite wound up if a child (or adult for that matter) is eating something buttery and I can see they’ve got butter on their fingers. And even if they wipe them with a napkin, I know that smell is still lingering and is going to be transferred to anything they touch. I’m like a hawk ready to swoop if I spot that hand veering off course to the arm of my sofa! I become obsessed. You have been warned. Please just go wash your hands.

The smell of greasy cooking is another pet hate, especially where meat is involved – all that frying, saturated fat…urggh. But I don’t think I’m alone on that score. And clearly fish is another offender. Again,I love to eat it but can’t bear the smell of it on my clothes, and in my kitchen, after I’ve cooked it. And wet dog. I adore my dog but why, oh why, does even the clearest mountain stream make her smell so pongy? When I go out in the rain and my hair gets drenched, I don’t smell like rotten mushrooms. Apparently, it’s to do with bacteria on a dog’s fur and when the water starts to evaporate, it carries the bacteria into the air. Well, it's an affront to my nose. Wet dog smell is right up there on my list of disgusting smells.

And then there are a host of things that look good and should smell good but don’t. The oxymorons of smells. Lilies…lovely, but I don’t want my house to stink like cat pee. Same thing with a marguerite/daisy plant I have at my front door. It has such pretty flowers all year round but go close and sniff and you are transported to a farmyard of cow s**t. My mum has a completely irrational hatred of how cumin smells. She can’t/won't eat most Indian food as a result. It reminds her of bad body odour. But let’s not go there.

There are smells (a word that has vague overtones of something unpleasant) and then there are scents, perfumes and fragrances. Ever since I was little, I have loved perfume. My mum would never leave her bedroom, never mind the house, without applying perfume, and from the late 70s when my father brought her a bottle of a new fragrance - Oscar de la Renta’s first foray into perfume, predictably named Oscar - that became her signature scent. I knew no one else who wore it, so she was unique and therefore instantly recognisable as having entered a room simply by the waft of Oscar that preceded and followed her. I loved it and so it was natural that I would try it too. But I didn’t love it on myself. It didn’t suit me at all. And that’s the interesting thing about perfumes - different ones suit different people. Apparently, they react differently on different skins but perhaps it’s actually just that different characters are more suited to different scents. Either way, it’s worth spending time trying lots before settling on one that you really like, and if you find that perfect fragrance, I advise you to stock up. You'll see why in a minute. I adored another Oscar de la Renta perfume called Volupté, which had tones of my favourite flowers, freesias, among others. It was such an uplifting fragrance.

More recently, Mum got a bottle of Oscar and was quite perturbed that it didn’t suit her any longer. She thought her skin was reacting differently to it. She asked me to smell it and, being so familiar with its scent, I instantly knew it wasn't the same. I did a bit of investigating (my investigative skills are deserving of another post at some stage) and discovered that indeed the formulation had changed, and not for the better. As someone described it, “it’s like the hurried sketch of a masterpiece…simplified…cheapened” and that says it all really. Sadly, my favourite, Volupté, suffered the same fate. I was surprised at how disappointed I was to discover this. Smells have that effect. In the same way that they evoke memories, when you can no longer smell them or if you are confronted with a different smell to that which you remember and expect, there is a definite sense of loss. It is why children don’t like their comfort blankets to be washed. We all crave the smells that we associate with security and happiness, be they a comfort blanket or a perfume, the waft of citrus and pine from holidays in warm climates or the smell of a wood or turf fire from cosy, childhood winters. I have a new signature perfume now. It’s been described variously as “a confident perfume…intoxicating…mysterious” and then quite a few comments that are a little less flattering. “An old damp ashtray” had me scratching my head. The fact is smells are very subjective, we all smell them differently and different stages of life can heighten or change your sense of smell.

Homes have associated smells too. I was always able to tell if one of my children had been in a specific friend’s house because the house had a very particular, very pleasant smell. Eventually I realised it was a laundry detergent. I associate a lot of my pleasant childhood memories, particularly of visiting my German grandfather, with the smell of linseed oil, which must have been used frequently to treat wood in Germany. Or that green, grassy smell of fresh tomatoes that I associate with my Irish grandfather, who grew them in a greenhouse in our garden. Or freshly mown grass, that indisputable sign of long, school holidays. And even though I don’t smoke and can’t stand the smell of cigarettes, I love the rich, complex aroma of cigars, despite the fact that no one in my family or close circle has ever smoked them, so in that case it’s not as a result of it being a familiar smell to me.

And finally there are the superpowers of scents, the ones that come towards you from a distance, you see their outline at first, then gradually the details begin to form until finally they reach you and the full impact of their beauty is almost too much to bear. The florals. For me it’s freesias, gardenias and sweet peas.

Smells, fragrances, scents, perfumes, aromas, whatever you call them, how flat and colourless our lives would be without them. And how typical of the cruel nature of Covid-19 that one of its first symptoms, as well as one of its main long-term effects, is loss of smell. If that’s not reason enough to stay home and stay safe, I don’t know what is.