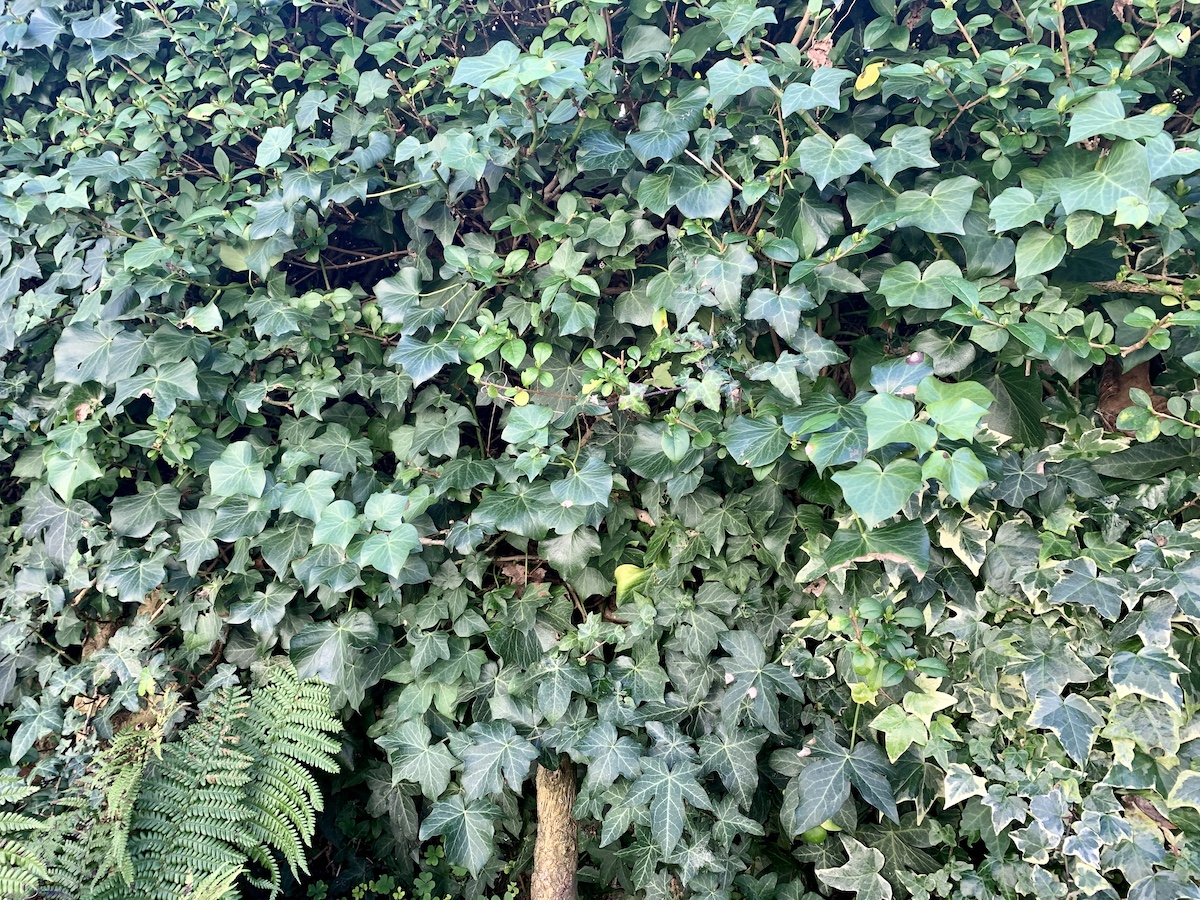 In League with Ivy

I’ve a bit of a love/hate relationship with ivy. I find it an attractive-looking plant. I mean who doesn’t find an ivy-clad old building or tree charming? I am drawn towards houses whose facades are heavy with ivy. There is something so inviting about them. However, there is another side to ivy that is less charming, when it starts to damage walls, wind its way into gutters and cause serious structural damage.

It shouldn’t be possible for such a delicate little plant to wreak such havoc but yet it can. It creeps through crevices, its bulky roots dislodge cement, and it climbs up other plants and trees in an effort to get light, often stealing that light from its host. So, it does need to be controlled.

But once you know how to treat it, ivy is your friend.

Well, it has extraordinary protective properties, absorbing bad stuff such as carcinogens from traffic and other environmental pollution. Having ivy in a hedge on a roadside property is therefore very beneficial. And really when it's in a hedge it shouldn’t cause any issues. Ivy just wants to get at light, it doesn’t actually choke its host, that’s not its intention. It merely uses it to climb up towards the light.

If it is allowed to grow up a building, it actually protects/insulates the building from the elements thereby increasing the heat inside in winter and, conversely, keeping the heat out in summer. The important point is that it does not cause damage to a building that is in a good state of repair. Ivy is a little like water. It has a knack of finding a weakness, say in brick or stonework where, for example, the pointing has dislodged, and taking root there.The same is true with wooden cladding if it finds a way in behind it. So, it is important to ensure that there are no cracks or crevices in your building that ivy can enter.

We have two gate posts that are made from solid granite blocks with capping stones on top. You would think that, being granite, nothing could possibly damage them but yet ivy has managed to squeeze in and root between the upper blocks and the capping stone. Its roots are bulbous, gnarly and strong. If they are in the ground, they cause no issue but in your wall, sneaking under the masonry, it’s a very different matter.

But let's not dwell on the negatives because it's not that ivy sets out to harm no more than a bird sets out to cause problems by building a nest in your chimney.

Ivy also benefits wildlife by, not only providing food in the form of berries, but also by providing excellent cover for birds and insects, protecting them both from the weather and from predators.

Smaller-leafed, variegated varieties look so attractive when used in floral displays and are also very pretty winding their way through a flower bed or trailing from a window box. Those slower growing varieties are also excellent for coastal gardens, slopes and banks as they protect against erosion.

Here in our coastal Irish garden, it’s abundant in our hedge, bulking it out and affording us greater privacy, as well as protecting us from the evils of traffic fumes. We also have some growing up the front of our house which we regularly trim back to keep it from climbing into and clogging gutters. And then we have a slower-growing variety, which I also use in flower arrangements. The beauty of it is that it is so easy to grow and requires virtually no care.

Don’t be afraid to embrace ivy in your garden. Its advantages far outweigh its disadvantages. You just have to understand it.