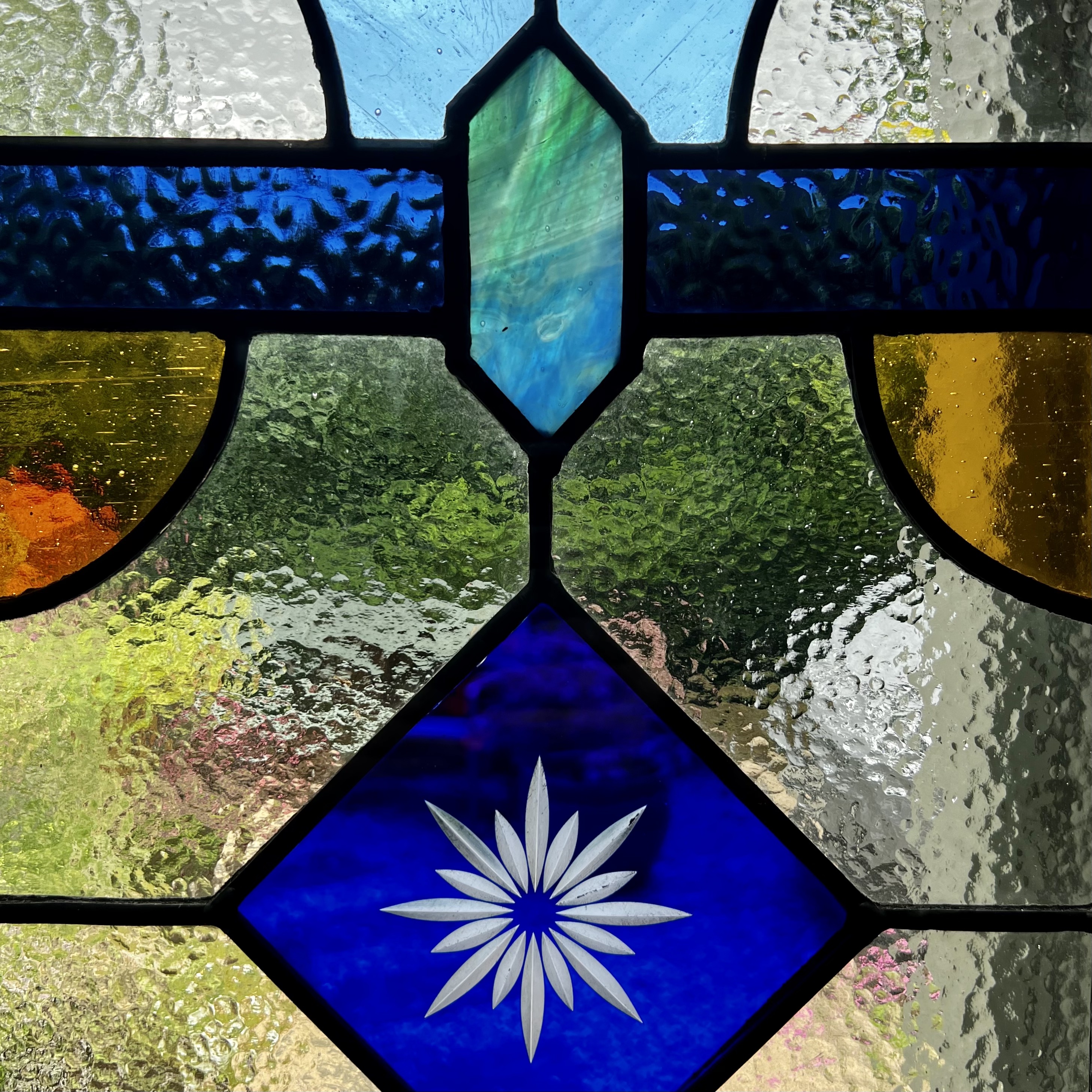 Our front door never quite cut the mustard. I’m not sure whether it never fitted properly in the first place or whether things shifted when we renovated but there’s a visible gap in the bottom right hand corner that no amount of insulating strips will fix. So, I’ve had it on the ‘to do’ list for several years, as in replace the door!

I had a plan of course. I’ve always liked the little arch of red stained glass above our hall return window. I also have strong memories of the leaded, coloured glass feature window that separated my childhood kitchen from the entrance hall. I loved the hues that the squares of different coloured glass threw across the hall when the sunlight caught them. So, although I’m not a fan of much modern/mass produced stained glass or of heavy leading for that matter, I thought our Victorian house could handle a panel in the front door and what fun it would be to design it.

I made one gigantic mistake. Rather than getting quotes for the door first and designing the glass after, I got carried away with the fun of designing and while waiting for the quotes, I enlisted the help of someone who I knew would ‘get’ my vision, someone who, incidentally, I met on Instagram and who has proved again and again how insightful she is and who has an ability to cut through all the noise and find solutions where you think there aren’t any.

The design had to be respectful to the era of the house and to those of us who live here, to our style, our character. Then the colours had to work with the interior, as well as the exterior, the glass couldn’t sap too much light and so make the hall very dark. And of course I needed someone who understood scale and perspective. In short I needed someone who had a good sense of us and what we’re about, an artist, an architect and an engineer rolled into one. That’s a pretty tall order but, guess what, my insta friend is all these and she was completely up for the job. She did one drawing and I loved it. And then she filled in the colours and I loved it even more. Her concept was based on a carriage wheel, a nod to the house’s humble beginnings as a coach or carriage house. It was also a nod to cubism (that’s another story). And in a twist of fate, the symbolism of the wheel is one that formed the backbone of my final year thesis in university so it felt familiar. The design was complex, lots of little details (four blue glory stars, that in the end had to be specially ordered, tipped their hat to the house’s Victorian origins), harmonious and pleasing. I was delighted. I contacted a stained glass producer who I also found on Instagram and he was fully on board.

Then the quotes to produce the door came in. I’ve written about these in a recent post but suffice it to say I was horrified, as was everyone else now involved with the project. I spoke to a friend who is a building contractor. He gave me the names of some suppliers that he knew. Their quotes were still steep. He visited to look at the door and asked me why exactly I wanted to replace it. I pointed out the gap. “I can sort that out”, he said. “And anyway, why do you want to seal up the house? These houses are meant to breathe”. (That’s another day’s blog…the fanatical sealing and energy-proofing of old houses). I agree, but they are not meant to breath in great big, gushing lungfuls of cold air all winter long. Now about the stained glass…

My current door has two opaque glass panels. The new design was just one large piece of stained glass with timber overlay. The timber overlay was a design feature, another nod to the wooden carriage wheel. My builder friend strongly advised against replacing the actual door and said he could cut the central wooden panel (the bit between the two glass panels) out of the existing door to accommodate the single large piece of stained glass (that would now need to be upscaled because the existing panels were longer than had been specified in the new door) and everyone would be happy. I agreed. Honestly, from this point on I wasn’t convinced.

I met with the stained glass producer. We all discussed glass. Who knew what a complex procedure that would be - so many colours and texture options. Frankly, at this point I left it to the two of them to figure it out. And of course there were the inevitable supply issues…they had to work with what was in stock or readily available. There were only two glory stars available from the English supplier for example so we had to source alternatives in Germany! The three of us had Zoom calls, the designer re-drew the design for the now bigger glass panel and it all became quite complicated. There was the timber overlay to be considered. Who would make that? It would need to be produced first, a grid for the glass to be measured against to ensure it fit correctly with the design. And then there were clear panes of toughened glass to go either side of the stained panel, in effect to create a triple glazed box. The stained glass would be too delicate on its own.

After our second Zoom call I took a step back and a breath and saw red flags all over the place. But above all my gut feeling was that the now bigger glass panel would be too much for the size of the door and too heavy with what was effectively triple glazing. I texted the designer and she understood my concerns. She assured me that from an engineering perspective it would work but agreed that it was a lot of glass and therefore a much bolder statement compared with the original idea. What to do? “Nothing has been made yet, you can change your mind”, she said. “We can do a new design that will work with your existing two glass panels or we can scrap the project altogether”. Scraping it wasn’t an option for me. I was too invested plus I felt guilty about having put two people through so much to get to this point. Naturally, I don’t take full responsibility. I attribute the bulk of blame to the obscenely greedy door manufacturers who sent me quotes that deserve investigating for their sheer excess (and not least because the most expensive one actually asked me what I was prepared to pay when I said the quote was way above my expectations). How do they sleep at night?

I rang the stained glass producer and gave him the news. He had already ordered some of the glass but was very understanding. I told him the new design would be a much simpler affair. He may have breathed a sigh of relief. Working the original design into the existing door (with all the messing of having to build timber grids in advance etc) had started becoming a bit torturous for all of us.

The designer got back to work, no more wheel, use as much of the glass we had already agreed upon in the new design, and no cutting the door. She also kindly painted a watercolour of the original wheel design and sent it to me for posterity. The new design was completed, colours were tweaked, glass was chosen and today is D-Day!

The moral of the story…don’t begin a process until you have the financials nailed! That seems so obvious but enthusiasm and the heart of this girl has overridden her head before…and no doubt will again.